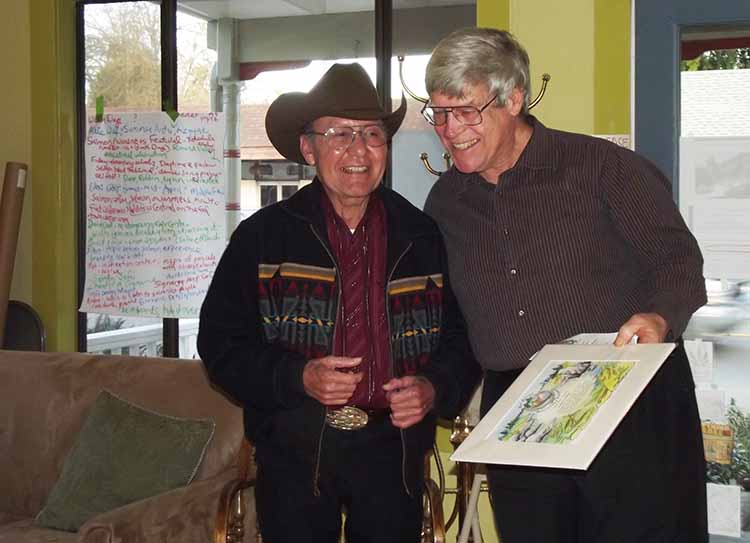 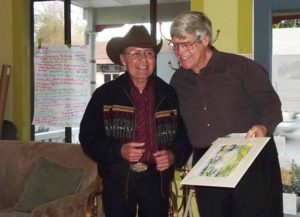 WILLITS 1/16/2017 — The Eel River Recovery Project (ERRP), which has been a 501c3 non-profit since March, met most of the day Saturday, January 14, for an event that started out with a board meeting, segued into an action plan meeting and an awards ceremony, and ended with beer and a potluck. Among the honorees were a Wailaki tribal elder, an advocate for parks, and two cannabis farmers. Though the organization takes no political position on cannabis, its members worked closely with the Mendocino County Resource Conservation District on a handbook for cannabis growers in the Eel River watersheds. Pat Higgins, the ERRP’s managing director, hopes to create detailed parcel maps for growers who want to cultivate cannabis in watersheds without harming the environment.

The ERRP is a non-advocacy group, largely reliant on volunteer citizen scientists, dedicated to monitoring the Eel River, educating the public about watersheds, and strategizing on how to restore the river and its tributaries. The group takes no position on contentious issues like the asphalt plant at Outlet Creek or the legalization of cannabis, preferring to focus on non-controversial issues like data and cyanobacteria. At the meeting, about two dozen people, including board members, volunteers, and a few new arrivals from the Bay Area and Portland, convened to discuss recent accomplishments and plans for future projects.

As of January 13, the ERRP had successfully crowd-funded $5,057 to analyze data and samples of cyanobacteria collected by its volunteers. This is the toxic blue-green algae that has killed several local dogs and has been a focus of the ERRP’s since its founding in 2011.

Higgins, the managing director, took a few victory laps before settling into a discussion about upcoming strategies to restore the Eel. According to the 2016 fall chinook count, he said, the numbers of fish may have doubled, from an estimated range of 10,000 to 15,000 in the fall of 2015, to a current estimate of 15,000 to 30,000 in the fall of 2016. “They were wall-to-wall above town,” he crowed. “You’d think you might be in Alaska. You’re in Willits, California.”

He described how ERRP volunteers helped Dr. Sarah Kupferberg, of UC Berkeley, move 100 yellow-legged frog egg masses to safety, during the removal of Benbow Dam on the South Fork in 2015. Because each egg mass contains about 2,000 eggs, he concluded, the ERRP assisted in saving 200,000 “potential frogs.” If the frogs weren’t saved, ERRP board member Bruce Hilbach-Barger remarked, “They fed 200,000 frog-egg eating somethings.”

The conversation moved into an informal brainstorming session about upcoming projects and strategies, which ranged from advice to environmentalists to influence policy by seeking seats on local boards, to discussion about possible dates for an upcoming event. 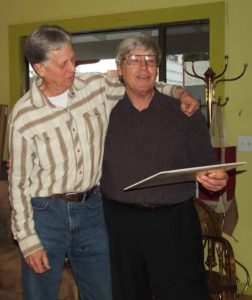 Jeff Hedin looks on as Pat Higgins praises him before presenting him with the Harmony award.

Jeff Hedin, who coordinated volunteers with the nonprofit organization Team Standish to keep the Standish Hickey state park open in 2013, encouraged community members to attend an upcoming Bureau of Land Management scoping meeting. From 5-7pm on January 17, at 111 Commercial street in Willits, the BLM, a federal agency that owns large portions of the wilderness in Mendocino County, will review its resource management plan. Hedin would like the public to inform itself about possible partnerships between the BLM and adjacent landowners to preserve wilderness. Public comment on this matter closes February 3.

Ernie Merrifield, a Round Valley tribal elder and lifelong educator, said he would work on the salmon awareness festival in Covelo again. This is an event that combines tribal history and environmental education with feasting on traditionally prepared salmon and corn. Prayers, songs, and dances have also been part of the festival in the past. In 2014 and 2015 it took place in the fall, but Merrifield suggested holding it around April 21 this year, so as not to conflict with other events in the tribal community.

Higgins suggested setting up “a one-stop shop” for cannabis growers who want to grow pot in a way that does not harm the environment. He suggested creating maps of growers’ parcels— upon their request— so “We could hand them a map that says, this is where landslides will happen if you punch a road. This is where you should stay out of the riparian zone with your garden enterprises…we’re a few big grants away, maybe from really doing a Cadillac on this,” he speculated.

Michael McKaskle, who is on the Redway Community Services District (water and sewer) board, opined that “Every single person in this room should be on some board…if you can come to this meeting, you can sit in a meeting with a bunch of boring people throwing out acronyms…in no time at all, you will know all the power people around.” He added that he thinks his position on the community services district board in Redway may make it possible for him to “leverage maybe $20 million to finance solar panels on public facilities.”

The action group decided to do educational outreach at the Summer Arts and Music Festival at the Mateel Community Center in Humboldt, the Kate Wolf Festival at Black Oak Ranch in Laytonville, and Reggae on the River, again in Humboldt. “It’s a great place to have a conversation about toxic algae and the condition of the river,” ERRP board member Hilbach-Barger agreed.

After brainstorming about the future, Higgins brought the topic back around to past accomplishments. He presented Ernie Merrifield with a lifetime achievement award for his decades of work in protecting the environment. “I’ve always loved Mother Earth and I will until I go back,” said Merrifield. 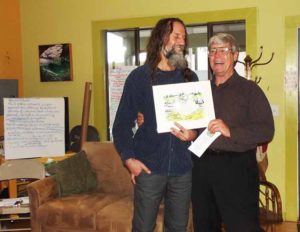 Dane Downing receives the volunteer of the year award.

Jeff Hedin received the Harmony award, for his efforts to protect and expand the Eel River wilderness. In his remarks, Hedin reflected on the ability of humans to destroy a mountain older than language. Then he combined two of his grandmother’s sayings, ‘haste makes waste’ and ‘he who hesitates is lost’ into a philosophy of protecting the wilderness. Together, he said, they mean you are “So prepared that you are never in haste and that you never need to hesitate, because you are so far ahead of the game.”