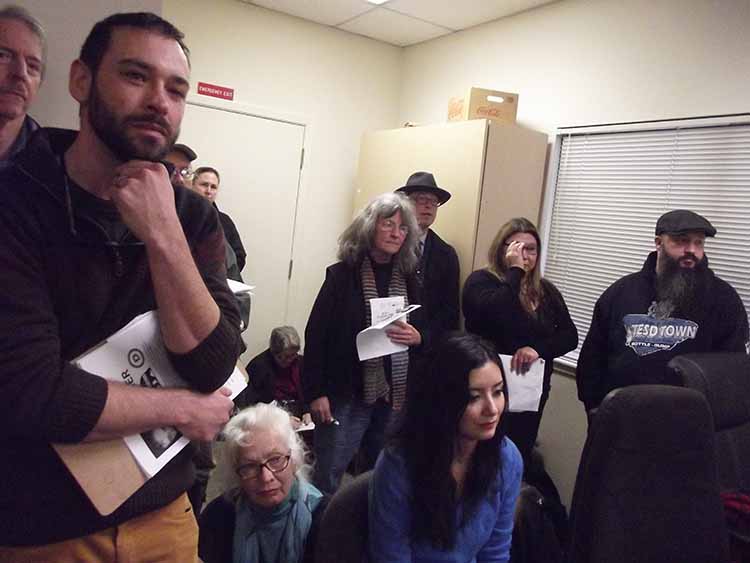 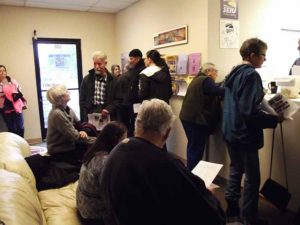 Voters wait their turn to cast a ballot for delegates.

UKIAH 1/8/2016 —  At ten o’clock on a rainy Saturday morning, candidates* gathered at the Service Employees International Union (SEIU) office in Ukiah. Fifteen men and nineteen women hoping to represent the California 2nd Assembly District as delegates to the Democratic State Central Committee were ready with their pitches and a little bit of swag. Val Muchowski, of the Mendocino Women’s Political Coalition, was handing out safety pins[footnote]Safety pins have become a symbol in the wake of the recent election. Wearers will say that they represent anti-racism, or support for people they feel may be targeted under a Trump administration.[/footnote] and promising to represent the interests of working people, women, and all people of color. Millie Olson, who recently sold her advertising agency, was pressing chocolate-covered coffee beans into voters’ hands “to help you stay awake during our speeches.” 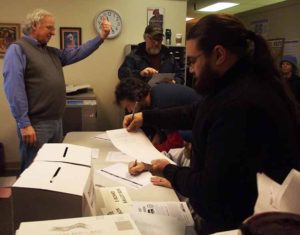 Convener Jim Mastin calls a voter up to the ballot box.

About 130 registered Democratic voters cast their ballots, after wedging into the SEIU meeting room to hear candidates give their speeches. Some spoke in person, while others, in the northern part of the 2nd Assembly District, had gathered at the Labor Temple in Eureka, and addressed Ukiah voters through a speaker phone. Themes that came up during the whirlwind morning election were frustration with the Democratic Party, a sense of being threatened by President-elect Donald Trump, and a determination to carry on the work of Senator Bernie Sanders and President Franklin D. Roosevelt. Joe Louis Wildman, who is the director of Region 1-West of the California Democratic Party, appeared to have three or four pairs of hands as he directed new arrivals to the sign-up sheets, answered questions, and ushered those who had already voted to the proper ballot boxes. One of Wildman’s triumphs of voter enfranchisement took place at Bill Graham’s memorial concert, in 1991. At that event, he recalled during a brief lull, “I worked the PortaPotties and registered over 300 people” to vote.

A significant number of the 34 candidates who ran this year also campaigned for Senator Bernie Sanders during his own candidacy for President. Thirteen of the delegate candidates, including current delegate Helen Sizemore, made up a “progressive slate,” which delegate candidate Robert Shearer referred to as “a strategic, coordinated infiltration of the California Democratic Party.”

Deborah Burger, a nurse who was part of the Sanders delegation at the national democratic convention in Philadelphia last year, expressed frustration with Hillary Clinton’s presidential campaign. “It was like, lower your expectations, Donald’s pond scum,” she said. What voters cared about, Burger went on, were their jobs, and Clinton “didn’t have a program to make that work.” While Burger acknowledged that unemployment is low, she said she thought underemployment is a bigger problem. “There’s people that I work with at the hospital that have two other jobs to maintain what they had ten years ago…some of them have three. And it’s not just the low-wage workers. These are nurses.” About the Russian hacking, she said, “Okay, that’s bad, but the reality is still that Hillary and the DNC were pretty despicable in their dealings with Bernie.”

Many of the candidates, not all of them listed on the progressive slate, also spoke of a lack of clarity in the Democratic Party. Olson, of the chocolate-covered espresso beans, told the crowd that, “Wimpy messaging just helped us lose the presidency to a demagogue.” Albert Handelman, of Santa Rosa, told voters that “The Republican party has been relentlessly pushing a false narrative…We used to be liberals,” he complained. “But they’ve made that a dirty word.” He called for “a clear and easy to understand message.” 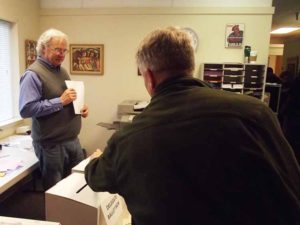 A voter drops his ballot into the box.

Jeff Reynolds, also of Santa Rosa, was making his first foray into organized party politics following his dismay at the presidential election. He said Democrats have “Given up the political dialogue to Republicans,” and that one of his goals was to “Bring us back to our New Deal roots.” After the speeches, he elaborated that, “I’m old enough to remember what life was like before Ronald Reagan, and life worked really well back then. For 50 years, we had a very stable economy and very stable financial institutions.” When he was reminded of civil rights advancements in the last 50 years, he said, “That’s not what I’m saying about going back to what we were doing during the Roosevelt years…there were definitely things that needed to be fixed, but the economic policy was much more middle-class oriented.”

Several candidates declared their readiness to bring good old-fashioned experience to bear if they were elected as delegates. Ursula Nieto, a health care worker, union member and patient advocate, spoke of her recent work, lobbying Congress to oppose any efforts to repeal health care reform without an adequate replacement. “As a patient advocate, working at Kaiser before health care reform,” she told the crowd, “I was sick and tired of telling people, you are denied your health care because you have cancer, or you’re pregnant. I don’t want to go back to those days.”

Nieto asked voters to cast their ballots for her and Patricia Thomas, another old union hand whose voice sounded slightly far away but enthusiastic as she addressed the crowd from the polling place in Eureka. She reminded her listeners of the old saying about making lemonade with the lemons life gives you. “We’ve been given some lemons here,” she observed. “But I’m gonna turn that phrase around. Let’s spike that lemonade!” She paused to let the crowds in both locations chuckle briefly, before reflecting that it will take more than talk to accomplish their goals. “So what do I bring to the table?” she asked. “I’m a 40-year union activist. I’ve worked in some tough places, like Texas and Florida, some tough situations…vision is great. We need vision…but grit gets it done.”

One thought on “Democrats vote for delegates, expressing alarm and frustration”