MENDOCINO Co. 12/12/2016 — Highway 101 is closed in both the northbound and southbound directions from Piercy, in northern Mendocino County, to the Humboldt County line, from mile marker 106.80 to mile marker 103.97. The closure is do to ongoing work to clear out a landslide. There is currently a detour diverting traffic from Highway 101 to Highway 271, due to emergency work expected to be finished December 30. 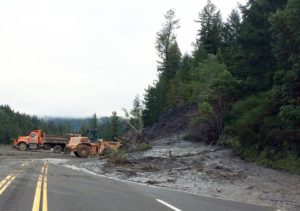 The landslide the closed the 101.

The following roads will be closed until further notice:

Usal Road from mile marker 6.26 to 24.30.
One of two lanes on Highway 101 at the CalFire station in Leggett is still closed, due to work which is expected to be done by January 31.

Further south, one of two lanes on the 101 north of Cloverdale is closed, due to work from 1.5 miles north of Comminsky Station Road to north of Frog Woman Rock expected to be finished December 31.

Beginning Monday, December 12, CalTrans will be doing routine maintenance on the 101 from Reeves Canyon Road to Black Bart Drive. There should be slowdowns from 8am to 4pm weekdays.

Far north, near Manor Lane on the 101, PG&E will be doing utility repairs starting December 9. The road will be closed completely at intermittent intervals from 9am to 4pm.

PG&G also has a permit to do utility work on the 101 near Steele Lane in Laytonville, starting December 13. There will be one-way traffic control from 9am to 2pm.

On the 101 near Standish-Hickey State Park, emergency slide repairs are ongoing, with a temporary signal 24/7.

PG&E also has a permit to do utility repairs on the Elizabeth Jane Rosewarne Memorial Bridge, which is the northern span of the Eel River Bridge on Highway 101. Work will begin December 12. One-way traffic control will be in effect 8am to noon.

On Route 162, near the Middle Fork Eel River Bridge, motorists can expect one-way traffic control from 8am to 4pm weekdays, due to geotechnical studies.

On Route 1, starting December 15, motorists should expect five-minute delays and one-way traffic control from 9am to 3pm weekdays, due to utility work near Fish Rock Road.

Also on Route 1, bridge repairs at Brush Creek continues, with one-way traffic control on weekdays from 7am to 11pm.

On Route 20, pavement work from the North Calplella Overcrossing to Cold Creek Bridge #3 continues, with one-way traffic control on weekdays.