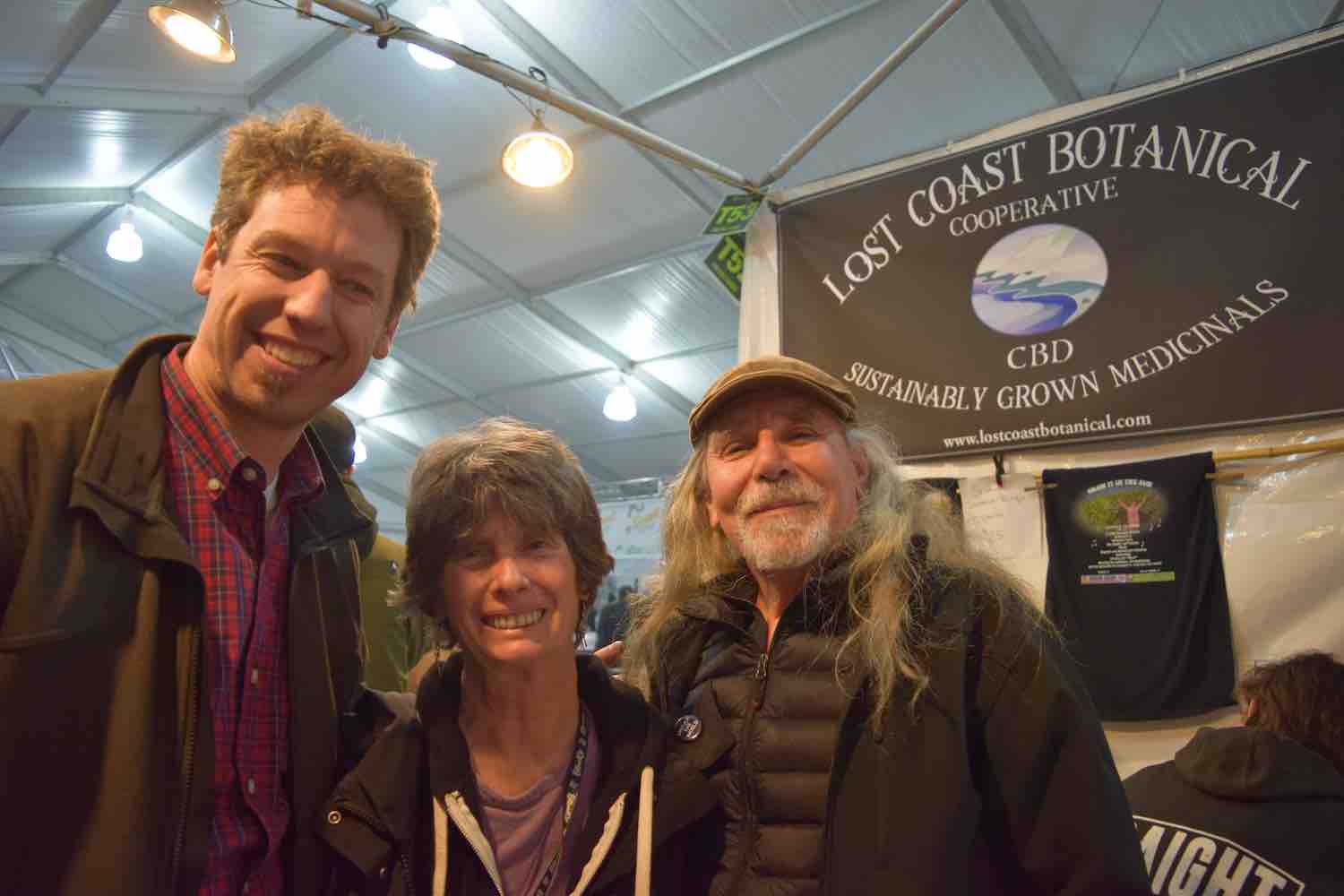 Nishan Karassik of Phylos Bioscience (left) collected cannabis genetics from Kat Hart of Sohum Seeds and Chris Larson of Lost Coast Botanicals to add to the Phylos Galaxy-- an online, open-source three dimensional map of the lineage of each known strain. According to The Emerald Cup founder Tim Blake, all of this year's award winners will be added to the Phylos Galaxy.

Editor’s note: Reynolds was hired by the Emerald Cup to conduct interviews, but produced this piece  independently.

SANTA ROSA, CA., 12/17/16 — Farmers of outdoor cannabis from around the Emerald Triangle came by the hundreds to showcase their craft this past weekend at The Emerald Cup — California’s premiere outdoor organic cannabis competition and conference — which attracted around 30,000 people to the Sonoma County Fairgrounds.

Many of these cannabis cultivators have deep back-to-the-land roots, but the rugged skills they gained living the remote homesteading lifestyle are different from those they’ll need to survive in the new regulations being developed under Adult Use of Marijuana Act (AUMA, also known as Prop. 64), and the Medical Cannabis Regulation and Safety Act (MCRSA) a law passed by the legislature. 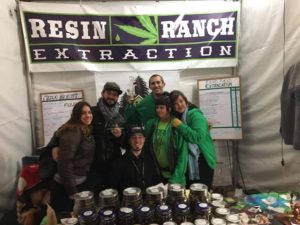 Standing in the middle of the group from left to right is Joey Burger of Mendo Hideout and Todd Franciskovic of Resin Ranch Extraction. They collaborated on the dry sieve concentrates that took 1st and 2nd Place this year.

“Small farmers are going to be in for a fight for their lives over the next decade and beyond,” wrote Emerald Cup founder Tim Blake in the event’s program. Blake noted that industrial agricultural entities and practices are beginning to enter the cannabis market and predicted that one acre farms will soon be common in California — leading to an eventual surplus of cannabis products. Yet, despite the prospect of increased costs and decreasing prices, this year’s event saw greater numbers of seasoned Emerald Triangle farmers emerging from the shadows than ever before.

“It was amazing to see how many heritage farmers from the Emerald Triangle were actually at the Emerald Cup,” remarked Mendocino cannabis farmer Joey Burger, who won 1st and 2nd place in the dry sieve concentrate competition, along with his partner Todd Franciskovic of Rosin Ranch Extraction, for their concentrates made from Barry White and Platinum Cookies.

Burger uses the term “heritage farmers” to refer to the large decentralized network of cannabis cultivators who’ve thrived while honing their craft in the Emerald Triangle, over several decades, despite perennial efforts by law enforcement to eradicate the crop.

“There were a lot of vendor that were NOT [heritage farmers] there as well. There were a lot there with fancy marketing companies, fancy branding and fancy packaging, but no history,” Burger remarked.

Cyril Guthridge of WaterDog Herb Farm — an off-grid permaculture demonstration center growing over 25 medicinal herbs besides cannabis — made a similar observation at the Mendocino Generations Collective booth in the event’s 215-only area (which required a doctor’s cannabis recommendation letter to enter). “There are a lot of small farms here from the Emerald Triangle, and there are also a lot of companies here marketing themselves to look like small farmers, when they’re actually not.”

The question now for many of these lifelong small-scale cannabis farmers is whether they can make the transition from the Prop. 215 world of almost no regulation, to the new hyper-regulated landscape of AUMA and MCRSA, while also preparing for an expected drop in cannabis prices that have been long been propped up by prohibition.

One of Burger’s strategies for surviving as a cannabis farmer has been collaboration. His farm, Mendo Hideout, is a member of the agricultural cooperative Emerald Grown, which helps small-scale cannabis farmers work together on marketing and regulatory compliance. This year the co-op held a plant swap for members, where Burger received the Barry White plant he used in his 1st place dry sieve from another Emerald Grown member, Wild Women Herbals. The dry sieve also included Barry White material from Frosty Acres Extracts.

Guthridge’s strategy for survival as a cannabis farmer in the legal market has been to partner with friends he grew up with in an intentional community in the hills of central Mendocino County. They’ve also turned to outside assistance from a cannabis creative agency, Mendocino Group, which helped them create the Arcanna brand for their cannabis flowers and salves, as well as to showcase their Back-to-the-Land heritage and permaculture lifestyle in marketing materials. 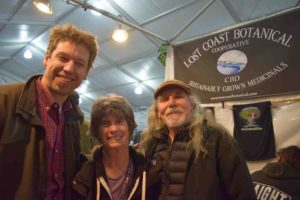 Nishan Karassik of Phylos Bioscience (left) collected cannabis genetics from Kat Hart of Sohum Seeds and Chris Larson of Lost Coast Botanicals to add to the Phylos Galaxy– an online, open-source three dimensional map of the lineage of each known strain. According to The Emerald Cup founder Tim Blake, all of this year’s award winners will be added to the Phylos Galaxy.

Wendy Kornberg of Sunnabis, a cannabis farm in Southern Humboldt County, also chose to partner with lifelong friends when she joined Redwood Roots Collective, although she admits it was a tough decision. “Even though I’ve grown up with everyone, it’s still a business and that is very different from a friendship. But it’s such a heartfelt, good group of people and I’m really happy to be a part of it. We’re eight farmers who all grew up in Southern Humboldt. Many of us are second generation farmers, and we get to collaborate and support each other, and represent each other’s strains,” Kornberg said.

She and her partner, Doug Cook, were behind the busy Redwood Roots booth in the 215-area all weekend, except when they went to the awards ceremony — which turned out to be a transformative experience.

As Kornberg stood at the back of the Grace Pavilion and heard one of Sunnabis Farm’s flower entries (XJ-13, a Jack Herer crossed with G-13) placed 17th, she screamed for joy. “I was the most excited 17th place winner ever,” she joked.

Then when they announced that the other Sunnabis flower entry, Mango OG, placed 10th, she turned red with excitement and fell to her knees as family members and friends embraced and cheered beside her.

“It has literally changed my entire life,” Kornberg reflected. “I’ve always known that we grow amazing things, but to receive these accolades and see that it comes through to someone who doesn’t know me, that absolutely changed my perspective of the whole thing. It was what I needed to be sure that I’m absolutely on the right path.”

That path began for Kornberg as a child during the CAMP-era of militarized eradication operations (Campaign Against Marijuana Planting). Kornberg recalls being on her parent’s off-grid Southern Humboldt homestead when low-flying helicopters passing over her had men hanging out of them holding AK-47’s. “It was terrifying. One guy looked right at me and stuck out his middle finger,” she recalled.

Kornberg says that the road to becoming a compliant farm in Humboldt County now has also been unnerving. The process has involved several thousands of dollars in infrastructure improvements, as well as water compliance and other required permitting fees.

“It’s so insanely difficult that these last few months I’ve been questioning if I can do this, but placing two out of the two strains we entered tells me we can do this.”

Joey Burger shared Kornberg’s optimism following the Cup. “I was happy to see so many heritage farmers from Humboldt and Mendocino placing,” Burger said. “It shows that experience really does shine through. I have a lot of confidence in the community and the craftsmen here, that we’re going to be okay, that our work is going to stand on its own two feet as it has for the last 40 years,” Burger said, “and I’m looking forward to the future and being a part of it.” 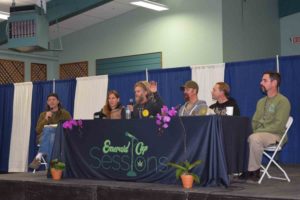 Ashley Mavon, who operates Humboldt Heirlooms with her partner Tom Maher, also felt confident about the future after the Zephyr they entered placed 16th in the flower competition. “We are not afraid because this is a vibrational medicine and the highest vibrational medicine comes from organic small farmers who care,” Mavon said. “Mass produced weed will not have the same healing effects. Living soil is the key to successful organic gardening, and we are using microbes from our land to build healthy soil ecology.”

The term “living soil” refers to regenerative farming techniques that are growing in popularity among cultivators, as demonstrated by the hundreds of attendees who showed up at the many expert panels on the topic over the weekend. The beyond-organic farming method was also highlighted during the award ceremony when a new Regenerative Cannabis Farm award was shared by Dragonfly Earth Medicine, Moongaze Flowers, and Green Source Gardens.

Nick Mahmood of Green Source Gardens took the microphone as he accepted his award onstage and emphatically implored the applauding crowd to “Make sure you figure out who you’re buying your cannabis from, and make sure they are taking care of the planet.” His words underscore one of the biggest factors in the future success of boutique cannabis– consumer choice.