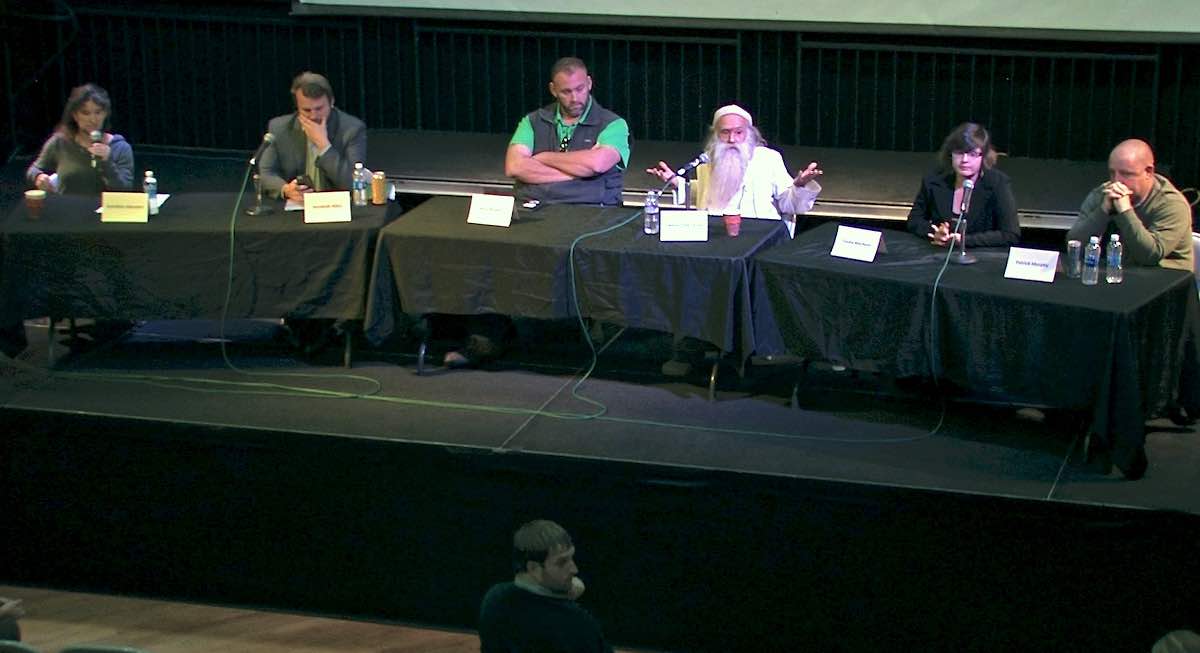 Panelists discuss the future of cannabis at the Mateel, Sunday Nov. 13

The passage of Proposition 64 (also known as the Adult Use of Marijuana Act or AUMA) heralds major changes for the North Coast’s biggest industry, crop and major employer. In response to this brave new future, and in hopes of planning for it, industry representatives met to discuss the new realities under both AUMA and the Medical Cannabis Regulation and Safety Act (MCRSA) at the 26th annual Hempfest, Sunday Nov. 13, at the Mateel Community Center in Redway. 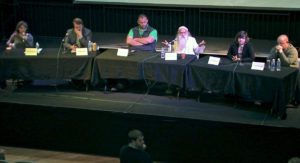 Panelists discuss the future of cannabis at the Mateel, Sunday Nov. 13

At a panel discussion six speakers discussed a range of viewpoints and positions, but together they agreed that Prop 64, along with the voluminous MCRSA regulations passed last year, mark the start of a highly regulated cannabis marketplace in California that will eventually eclipse the decentralized web of underground cannabis farms in the Emerald Triangle.

Sunshine Johnston, the proprietor of Sunboldt Farms in Southern Humboldt County, told the audience of around 75 people that it’s going to be hard to participate in the legal market, but it’s still a step that she hopes to see more people take.

“The money’s gone. There’s no money in this anymore if you’re a farmer…and in some ways, I’m actually glad to see it go. I don’t think it served us necessarily, as much as we thought it would. We’re just going to be farmers now…and it’s going to be challenging but we’re just going to give it our best,” Johnston remarked.

California Cannabis Industry Association (CCIA) Board member Nate Bradley told the audience, “If you know what a farmer goes through to sell tomatoes on the market, and you don’t want to do all that, you really need to stop and look at yourself, because we are in California, and it is over regulated compared to other states.”

Bradley also predicted that the black market would eventually disappear due primarily to a drop in prices. “Ultimately what will eliminate [the black market] is what law enforcement wasn’t able to do for 40 to 50 years,” Bradley said. “Slowly but surely the prices are going to dip down — the avenues for you to get that product to will get smaller and smaller, until it’s not financially viable to be in [the black] market anymore.”

Swami Chaitanya, President of the Mendocino Cannabis Industry Association, said “The black market isn’t going to go away [instantly], but it will decrease. And you have to remember that it’s not just going to be the sheriff anymore that’s going to come to make those inspections. It’s the State [Agricultural Department]; it’s the state Bureau of Consumer Affairs; it’s the County [Agricultural Department]; it’s the County Human Services Department, and it’s the Fish & Wildlife,” Chaitanya said.

“And there’s one more,” Nate Bradley chimed in, “It’s going to be everyone who got a license. They are going to start coming as well. The industry will turn on those who didn’t [get a license], and that’s something that you see in every other industry as well.”

Considering all the paperwork and costs involved, one audience member asked why anyone would want to join in the legal market. Emerald Family Farms co-owner Patrick Murphy replied, “Because we need representatives of what I like to call conscious capitalism — people who believe that entrepreneurship and business can be used to effect social change. It could also, for the first time in the history of the U.S., chart a path forward to being both economically and environmentally sustainable. And if you stay back behind your gates, we’ll end up where Oregon is, where 8 out of 10 recreational licenses are not people from Oregon or California. It’s people in Missouri, and New York that have ownership of Oregon’s industry. This is a big deal. You want ownership of your industry. It will only reflect us if you stand up and get out there.”

Chaitanya pointed out that Prop 64 has overnight increased the size of the potentially legal market in California.  “It has opened up a huge legal market. Ten percent of people, maybe, were selling to the dispensaries. Now many more people [could sell] who couldn’t sell legally before, although they wanted to be permit compliant.”

One point of special concern to the panelists is the ticking clock of the “type 5 license.” Under AUMA, a type 5 license will allow for a cannabis farm of unlimited size, though they such licenses will not be available until 2023.

Teisha Mechetti, proprietor of Humboldt-based farm management firm AgDynamix, described the potential for unlimited Type 5 mega-farms as the “lurking dragon that could just erupt at any point and consume all this opportunity for small businesses. We see it in agriculture today, it’s a problem. It’s the reason why we’re having resource issues, predominantly…As of right now we’re in the safe zone, we have this five year window period to get it together and to get organized.”

California Growers Association Executive Director Hezekiah Allen explained why he strongly opposed Type 5 unlimited licenses, and will be advocating that they never be issued.

“Our best estimates are that we grow 15 million pounds statewide,” Allen said. “The legal in-state market is about 1.5 million pounds, and the legal potential in-state market is about 2.5 to 3 [million pounds]. So, in order to stay in-state, we have to reduce by about 70 percent, which is one of the reasons why it’s so important to not have a Type 5 unlimited license. Rather, [we need] to have tiered licenses so instead of 30 percent of growers getting to grow everything, everyone gets to grow less than they used to. So it’s this way of modulating supply through everyone scaling back a bit, rather than picking winners and losers. The legislature and policy makers are well aware of this problem, and we have them being very intentional market controls that are mindful of that while creating a broadness of opportunity. But federal change is the only real way to kill the black market.”

Patrick Murphy stressed that he hopes more local cannabis farmers will become compliant and form agricultural cooperatives. “There are a lot of good groups up here,” Murphy said. “You have True Humboldt, Eden Farms, Honeydew…we need more…we need lots of groups up here, and those groups need to start working together, and having honest conversations about inventory sharing; about keeping the price point where we want it, about all kinds of stuff. We are not going to make it through this if we do not work together.”

Murphy shared his opinion on what a future cannabis economy might look like in Humboldt County.  “I think that we’ll have some millionaires around here. I think that, on the low end, we have a really good chance of offering a living wage job, even for people that are in labor. I think that our goal would be to have about 5,000-10,000 people paying taxes on about $100,000 to $150,000 per year.”

In the end the majority of voters in Humboldt, Mendocino, and Trinity County voted yes on Prop. 64 (albeit in Trinity, by a single vote). After three hours of discussion an audience member asked the panel how he could get more of his farmer friends to start preparing for the new law. The panelists emphasized that in Humboldt County, farmers need to get their county permit applications into the planning department by December 31, after which it could be years before the county completes an environmental impact report on it’s cannabis zoning ordinance.

“If you’re a small farmer, it’s relatively easy to get the process started, but tell your friends that we are running out of time,” Teisha Mechetti said. “We may not see Humboldt County’s program open up again [after Dec. 31] for several years…We don’t know, but get your foot in the door.”

The entire forum can be heard here.

2 thoughts on “What does legal weed mean for the Triangle? Canna-leaders weigh in.”