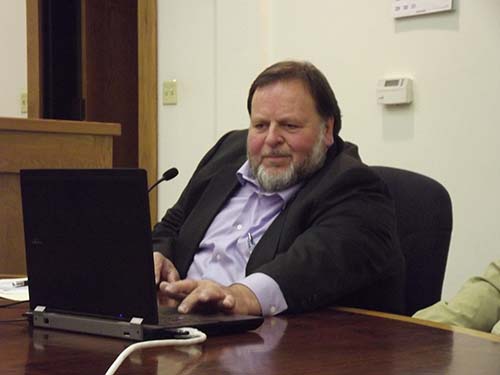 UKIAH — At its regularly scheduled meeting on Wednesday, November 2, the Ukiah city council lingered on the topic of an abruptly terminated attempt at negotiating an out of court settlement with the Ukiah Valley Sanitation District (UVSD). The council eventually agreed to send a modified confidentiality agreement to the UVSD, based on the condition that the UVSD dismiss its lawsuit or stay further proceedings. 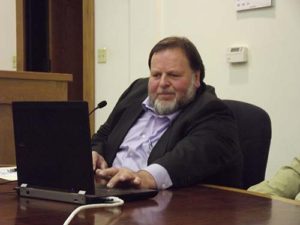 The council also voted unanimously to adopt fire and building codes, and to approve monies for projects at the airport and the hydroelectric power plant at Lake Mendocino. The two turbine discharge gates on the plant need to be repaired and upgraded before the fish hatchery opens on December 1. One of the runways at the airport is scheduled to be narrowed and have its pavement repaired. There is also a plan to realign a taxiway to comply with Federal Aviation Administration standards. 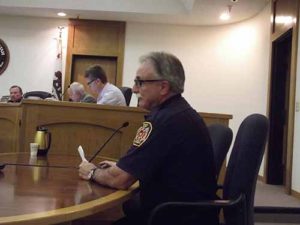 Perhaps the most dramatic moment of the evening came when Councilman Kevin Doble described an October 28 meeting between UVSD representatives and the ad hoc committee that was formed to negotiate an out of court settlement with the UVSD.

In 2014, the UVSD brought a lawsuit against the city, claiming that the city is not adhering to the terms of a 1955 agreement detail how the UVSD and the city divide the operation and management costs of the sewer system they share. A letter to the council from UVSD Manager Frank McMichael, dated September 20, 2016, states that the city collected revenue from ratepayers in both the city’s and the UVSD’s territory, but failed to reimburse the UVSD. With legal action pending, the state will not make grants to the city for “purple pipe” projects, which allow treated wastewater to be put to a useful purpose.

Doble explain with some frustration that the UVSD representatives arrived at the October 28 meeting with their lawyer, Duncan James, and a demand that the city sign a confidentiality agreement that Doble described “as basically a take it or leave it option. We were informed that it was the desire of the District Sanitation Board that the lawyers be the lead negotiators and that the elected representatives would have little or no participation…we clearly have an aggressive appellant,” he concluded.

Donald McMullen, an attorney in James’ office, gave a slightly different account of the October 28 meeting. Reached on November 3, McMullen said that James was out of state. McMullen, who was not present at the October 28 meeting, said all parties had agreed to keep it private. He added that it is customary for such meetings to be confidential, and that only the results are reported on, not the proceedings. McMullen said that he himself had sent the confidentiality agreement to city attorney David Rapport’s office, several days before the October 28 meeting. He also said the meeting ended when one of the council members used profane language and stormed out, though he declined to say who had said exactly what, citing confidentiality.

Wednesday’s city council meeting ended with an inconclusive closed session, but the council convened again in a special meeting on November 4. After another closed session, the council reported that all five members had signed a letter to the UVSD board, stating the council’s willingness to agree to a modified confidentiality agreement, “if the District Board agrees to either stay further proceedings in the lawsuit or dismiss the lawsuit without prejudice.” The letter, dated November 4, specifies that “That revised confidentiality agreement would allow open and public consideration of any proposed agreement resulting from the work of the ad hoc committees.”

The next item was city Airport Manager Greg Owen’s update on plans to bring the airport into alignment with Federal Aviation Administration (FAA) standards. Owen also wanted the council to authorize him to apply for a CalTrans grant in the amount of $11,517, to help pay for the project. The plan includes demolishing taxiways B and D, reducing one runway from a width of 150 feet to 75 feet, fixing pavement, and installing new lights. The runway is currently considered non-standard and unsafe by the FAA.

Owen acknowledged that some CalFire pilots had initially been concerned about the modifications, but that he had received word earlier in the week from the chief pilot that CalFire does not believe the changes will affect firefighting operations.

The meeting stayed on the subject fire for a few more minutes. Ukiah Valley Fire Authority Division Chief and Fire Marshall Kevin Jennings recommended the council adopt the 2016 fire code, saying that, though he may have to do some research on distilleries, “I’m happy with the way the code reads. The change book is about 100 pages long and cost my budget about $50.” The council voted unanimously to adopt it.

Building Official David Willoughby also presented a code for adoption, in this case an ordinance to amend the city building code regulations in the city code. Every three years, the state adopts new construction codes, and cities and jurisdictions are required to amend municipal codes to adjust to them. He said the new code includes added appendices, changed code numbers, and changes to the energy code. The new code also contains additional language about floodplain management to comply with the National Flood Insurance Program, and clarifications about the expiration of electrical permits. A free day-long class in energy code training will take place on Monday, November 21, from 8:30am-4:30pm, at the Ukiah Valley Conference Center.

at the 3.5 megawatt hydroelectric power plant at Lake Mendocino. The repair, which he said should take a week and a half to two weeks, will have to take place before December 1, when the fish hatchery opens.

Because the gate is underwater and the extent of the repair is unknown, Grandi said he asusmed the worst case scenario but did not expect to spend the full amount. One of the two discharge gates on the plant does not work at all. In order to do the work, the turbine discharge pond in front of the plant will have to be drained, necessitating a 52-foot dike.

The company Grandi recommended for the work is Syblon Reid, an engineering contractor based in Folsom, California.