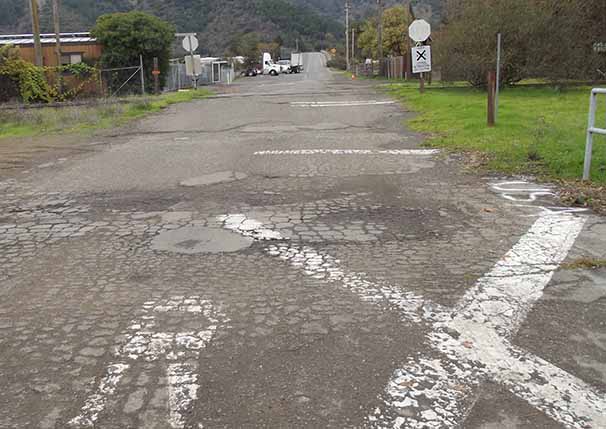 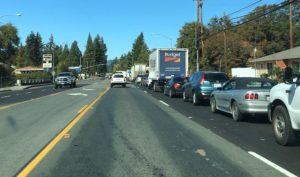 UKIAH, 11/29/16 — Mendocino County’s roads are rated the worst in California, according to a report published in October and commissioned by a coalition of infrastructure advocacy groups led by the League of California Cities. The 223 page report attempts to answer questions about the pavement condition of local streets and roads; what it will take to repair them; and what the funding shortfalls are. Locally the annual report has caused a bit of a stir, with Mendocino County Director of Transportation Howard Dashiell quoting it at length in a request for the Mendocino County board of supervisors to support a state proposal that would re-shape the formula for bringing Sacramento money to bear on fixing local roads. 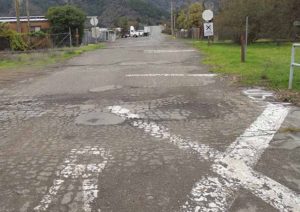 The report, called the California Statewide Local Streets and Roads Needs Assessment of 2016, uses the Pavement Condition Index (PCI) to rate the state of the roads. The PCI, developed by the United States Army Corps of Engineers, is a numerical index used to assess the state of the pavement, with 1 being the lowest and 100 the highest. The needs assessment states that Mendocino County’s roads average a 35, or “poor,” while the statewide average is 65, or “at risk.” Of the six other California counties with an index of “poor,” Lake County comes closest to Mendocino, with a PCI of 40. Mendocino’s northern neighbor, Humboldt County, comes in with a PCI of 63, while Trinity’s PCI is 62. Sonoma, to the south of Mendocino, has a PCI of 55. The highest-ranking county in the State is Orange County, coming in at 79. 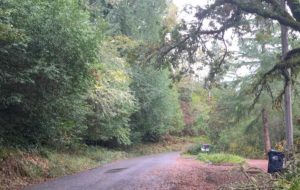 A county road in Mendocino after a storm.

The report cites aging infrastructure, rising construction costs, and an increased population among factors contributing to the status of the state’s local road network. The solution, says Fourth District Supervisor Dan Gjerde, is in “a three legged stool” of state, local, and federal contributions to road repair. In fiscal year 2015/16, 9% of the funding for pavements came from federal sources.

With decreased revenue from the state-based gasoline tax, cities and counties are feeling the pinch of state-level budgetary restraints. About half of the revenue used to repair roads in California comes from local sources, mainly sales taxes, which makes for a wobbly stool. Prior to the election, Gjerde characterized Measures AI and AJ, which would tax cannabis and then direct some of the revenue toward county road repair, as “the most important” of the county measures. However, mental health, marijuana enforcement, and fire and emergency medical services are also slated to receive cannabis tax money. There is no clear notion of how much revenue could be generated by the measure, which is likely to win, though the vote counting is not yet done.

Phil Dow, the Executive Director of the Mendocino Council of Governments (MCOG), said “the only thing that halfway works is the local-option sales tax” for fixing roads, which he said he wanted to get on the ballot for the last election. However, with the measure to raise taxes for the mental health facility, he added that having “both on would probably have meant mutual death for both of them.” Janet Orth, the Deputy Director of MCOG, said that MCOG did some polling to find out if voters would pass a half-cent sales tax to fix roads and it “looked like we had a good shot at it. It was positive…maybe not definitive.”

Orth was “really disappointed that we didn’t get anything this year” on the state level, when a controversial measure was punted out of a special legislative session to next year’s lawmaking. Senate Bill X1-1,  which proposes to raise $2.5 billion a year for roads and streets, was slated for a lame duck session of the state legislature this month, but has now been bumped to the next session. The funding package, which consists of two identical bills introduced in August by Assemblymember Jim Frazier (D-Oakley) and State Senator Jim Beall (D-San Jose), has the official support of the League of California Cities, an advocacy group that prioritizes increased funding for transportation and water infrastructure.

In Fiscal Year 2014/15, the Mendocino County board of supervisors approved a $2 million line item in the General Fund budget for corrective maintenance and pavement preservation. With $2 million, Director of Transportation Dashiell said, the county could fix 50 miles of road with chip-seal or 25 miles with slurry. The most expensive option would be five miles of “smooth asphalt that’s like gold.” With $9 million a year devoted to road maintenance, he said, “we could at least preserve where we’re at and probably make some modest improvement.”

Dashiell calculates that, if SBX1-1 passes, Mendocino County would receive $8,112,312 per year from proposed increases in gasoline and diesel taxes and license and registration fees. He also estimated that the county’s share of $351.5 million in transportation loan repayments from the state would be a one-time payout of $2 million.

However, the proposal has its critics, like Joshua Stark of TransFormCA, a non-profit transportation advocacy group. In a recent post on the subject, Stark wrote that “the proposal contains very little for public transportation,” and that, while it would almost double the state’s Active Transportation Plan, “it does little to require that streets be retrofitted so that people can actually bike and walk safely on them.” Stark opined that the proposal would increase congestion, poor air quality, and over-reliance on privately-owned cars.

One thought on “Report rates Mendo’s roads worst in state”