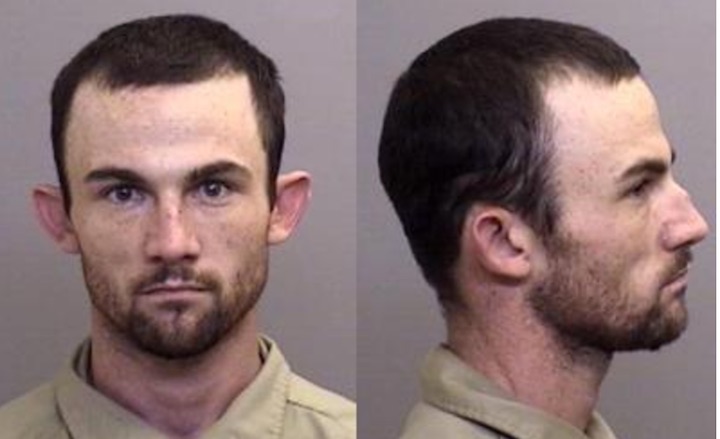 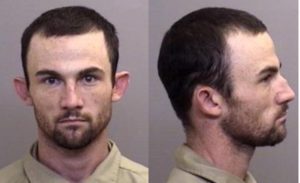 Included below is a November 9 press release release from the Mendocino County Sheriff’s Office. The Mendocino Voice has not independently confirmed any of the information. All suspects are considered innocent until proven guilty.

Around 7am on November 8, MSCO officers were notified that 29 year old Mickey Hill, a suspect wanted on several outstanding warrants, was at the Sherwood Valley Casino. Responding officers identified Hill in a vehicle approaching the intersection of Highway 20 and Blosser Lane, where they attempted to initiate a traffic stop and activated emergency lights. However, Hill failed to stop and fled on to Coast Street with officers in pursuit.

As Hill attempted to turn onto West Valley Street, the vehicle hit a curb, drove onto the sidewalk, and then hit a wooden fence. Hill continued to evade deputies by fleeing the scene and driving across Main Street to East Valley Street, where he hit another curb at the intersection with Humboldt Street, resulting in a flat tire on his vehicle. Hill then exited the vehicle, fled on foot, and was arrested after a short chase. Willits Police responded to the hit and run accident which resulted in damage to the fence.

According to the booking logs, Hill was booked on November 10 on $405,000 bail, although the press release states he is being held without bail. The full press release is included below.

Synopsis:
On 11/8/16 at approximately 0710 hours, deputies from the Mendocino County Sheriff’s Office received information that S-Mickey Hill was at the Sherwood Valley Casino (100 Kawi Pl. in Willits, CA).

Deputies had been searching for S-Hill because he had multiple warrants issued for his arrest. Deputies responded to the area and observed S-Hill driving a vehicle northbound on Blosser Ln. S-Hill was slowing as he approached the intersection with Highway 20 and deputies identified him as the driver of the vehicle from prior law enforcement contacts.

As S-Hills vehicle attempted to make a right hand turn onto West Valley Street it struck the curb on the north side of the roadway, drove up the sidewalk and struck a wooden fence line in front of a residence. S-Hill then left the scene of the accident and continued across Main Street onto East Valley Street. The vehicle then struck the curb at East Valley and Humboldt Streets at which time it became disabled due to a flat tire. S-Hill exited the vehicle and fled on foot. Following a short foot chase he was apprehended and placed under arrest without incident.

S-Hill was arrested and booked into the Mendocino County jail for 2800.2(a) VC [Felony Evading], 1203.2 PC [Violation of Formal Probation], 20002 VC [Hit and Run – Property Damage], 14601.1(a) VC [Driving on a Suspended License], felony warrant for probation violations, and a misdemeanor warrant for resisting or obstructing a peace officer.

Officers from the Willits Police Department responded and investigated the hit and run committed by Hill resulting in property damage to the fence on West Valley St.

Hill was subsequently booked into the Mendocino County Jail where he is currently being without bail..