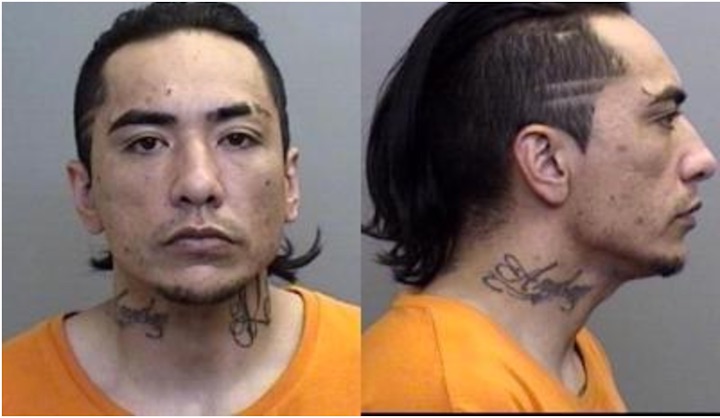 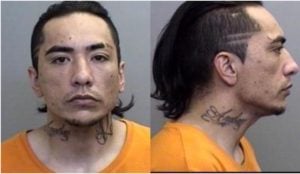 The following is a November 11 press release from the Mendocino County Sheriff’s Office. The Mendocino Voice has not independently confirmed any of the information. All suspects are considered innocent until proven guilty.

The incident took place around 3pm November 7 on the 1300 block of North State Street in Ukiah, near the Discovery Inn. A respondent called in a report of four people in a red Toyota inhaling nitrous oxide. The respondent also said two females were leaving the car and entering different hotel rooms for short period and they suspected human trafficking.

Deputies responded to find the vehicle leaving the hotel parking lot containing 31 year old Edward Esquivel of Willits, “who was known to have a suspended drivers license,” and a female who was later determined the be a juvenile. Esquivel pulled into oncoming traffic and crossed State Street to the Shell Station where deputies conducted a traffic stop. They also noticed nitrous oxide canisters and a machete in the vehicle.

According to the release, Esquivel became uncooperative and was asked to exit the vehicle. As he was being patted down, he pulled back and when other deputies arrived he became combative. A struggle ensued with Esquivel and several deputies, “all falling to the ground.” The suspect tried to flee and was tased until he became incapacitated and was handcuffed. It was later determined he was under the influence of a controlled substance.

A search revealed a loaded handgun in Esquivel pants, which the release states he “had placed a handgun down his pants as he was being pulled over at the gas station.” Esquivel’s felony status prohibited him from possessing a firearm at the time. He was booked on $95,000 bail, and the juvenile female in the vehicle was arrested “by juvenile probation on unrelated charges.”

Crime/Incident:
11550(e) H&S – Under the influence and in possession of weapon

Synopsis:
On 11-07-2016 The Mendocino County Sheriff’s Office received information that four subjects were inside a red Toyota vehicle inhaling nitrous oxide from a container while parked in the 1300 block of North State Street in Ukiah, California.

It was also reported two females were seen getting out of the vehicle and going into different hotel rooms for a short period of time and per the reporting person believed there to be a situation of human trafficking.

Sheriff’s Deputies responded to the location and observed the vehicle pulling out of the hotel parking lot.

Deputies noticed the driver of the vehicle to be Edward Esquivel, who was known to have a suspended drivers license. The Deputies notice the vehicle was also occupied by one female passenger, later determined to be a juvenile.

Esquivel pulled out into oncoming traffic forcing cars to stop and he drove into the Shell gas station across the street where a traffic stop was conducted.  A Deputy approached the vehicle on foot observing numerous nitrous oxide canisters between the seat and a machete laying in the back seat area.

Esquivel immediately became uncooperative and for officer safety reasons he was told to exit the vehicle. Once out of the vehicle a pat search of his clothing was conducted and when the Deputy was searching Esquivel’s waist area he pulled back.

Esquivel became combative when other Deputies arrived and a struggle ensued resulting in Deputies and Esquivel all falling to the ground.

Esquivel was able to stand and tried to run away.  At this time one of the Deputies deployed his Taser and Esquivel was incapacitated until other Deputies were able to handcuff him without further violence.

Esquivel continued to be uncooperative and later during the course of this investigation it was found he was under the influence of a controlled substance.

A search revealed Esquivel had placed a handgun down his pants as he was being pulled over at the gas station. The handgun was found to be loaded at the time of his arrest.

All of the Deputies involved in the struggle with Esquivel sustained minor injuries.

The female juvenile who was in the vehicle was arrested by juvenile probation on unrelated charges.

Esquivel was booked into the Mendocino County Jail where he was to be held in lieu of $95,000.00 bail.