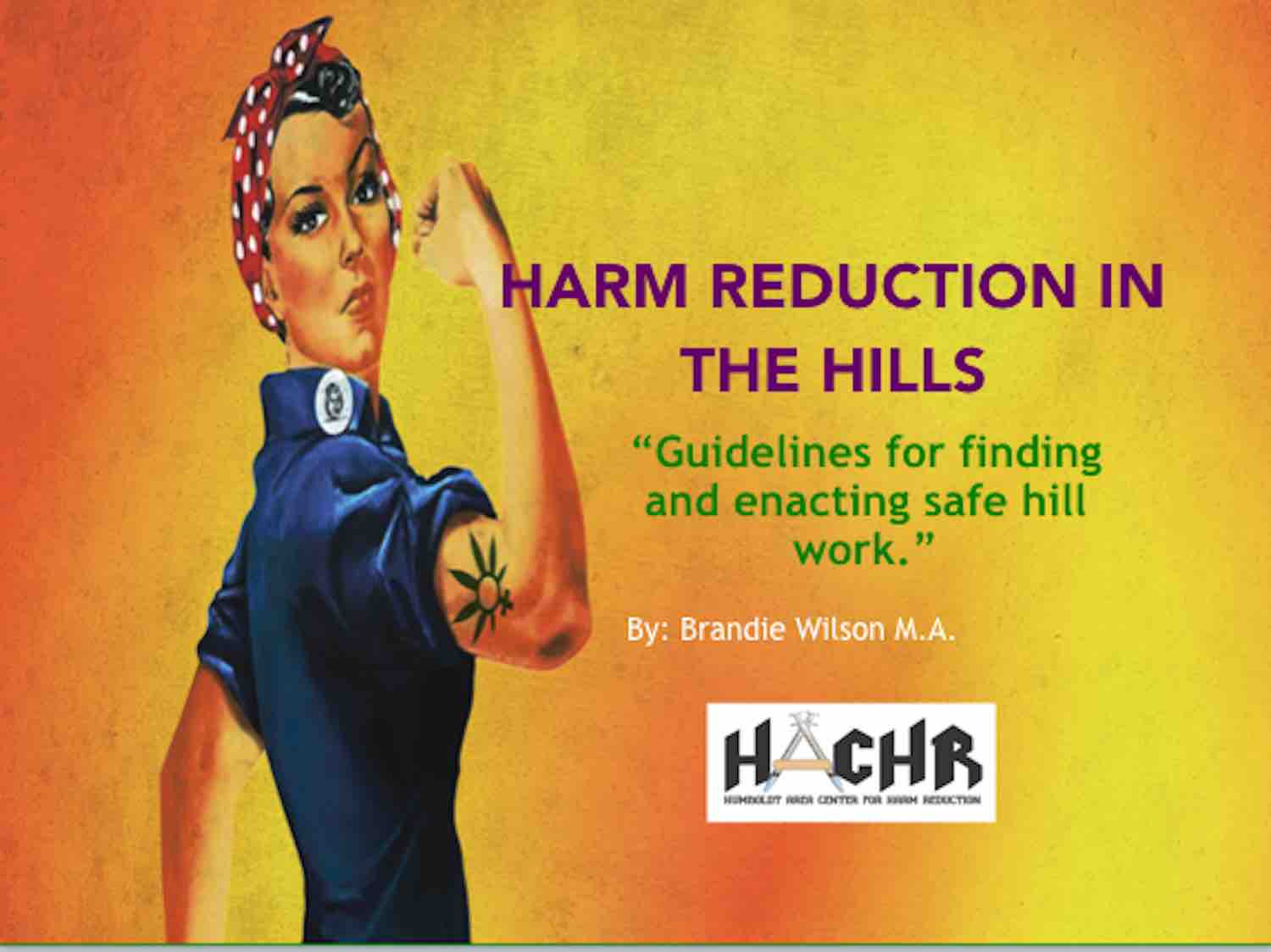 REDWAY, CA — Recently a gathering of community organizers, social services employees, and cannabis workers met in Redway to discuss a vital but unpleasant topic: the safety of female cannabis trimmers in the hills. Though it’s something we don’t always like to be upfront about in the Emerald Triangle, cannabis workers — and particularly women — are often vulnerable to exploitation, sexual abuse, or assault while working on remote, debatably legal farms. Last month an article in Reveal, by Shoshana Walter, brought national attention to some of these issues by highlighting certain cases of sexual assault in the region. Since then the question of how to address and improve trimmer safety has been widely discussed. 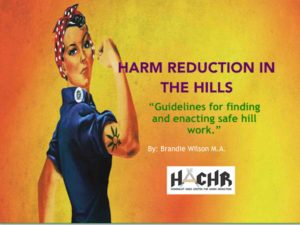 At the October 26 meeting at the Southern Humboldt Family Resource Center in Redway, sociologist and harm reduction worker Brandie Wilson and Redwood Women’s Foundation Michelle Hood led a discussion on safety strategies for female cannabis workers — whether year-round residents, or travelers here for the season. The Redway meeting followed an earlier event held in Eureka this month, where the women focused on empowering female trimmers using harm reduction strategies and general “common sense.”

READ MORE about the event.

In part, the organizers hoped to counter the idea that women working with cannabis are more vulnerable to sexual assault or abuse or face disadvantages, but to highlight the ways the secrecy of the underground industry can exacerbate problems that face women workers everywhere, including other migrant farm workers, sex workers, or those in low-wage unstable employment.

Through conversation with the various attendees and a presentation prepared by Wilson, we’ve included below is a set of general good ideas and best practices were devised that can help keep you safe when you’re looking for work in the hills. Here are some highlights from the “conversation about common sense,” and some additional resources for trimmers (and those that love them) below.

Often you can evaluate a lot about a situation by how you wound up there. Ask yourself: where did I find this job? Is it from a friend, previous employer, referral, word of mouth, craigslist, a flyer, or on the street? For the last three, ask yourself why are they picking up workers and also why you are looking for work in this way — ”Either they’re so brand new” said Wilson, and might not be a great boss from inexperience, or they are “such a horrible boss” that workers won’t return. She also warned that Eureka Police had posted fake ads for trimmers on Craigslist.

Ask a lot of questions:

Don’t be intimidated, and don’t feel like you’re already obligated, or like it’s impolite — ask a lot of questions! Do this gracefully since many gardens are still underground and people can be touchy about sharing certain types of information with strangers, but things like payment should be straightforward. One tactic is to play a little dumb. Rather than trying to come off as super knowledgable, pretend you know nothing and ask a lot of questions. Knowing certain unexpected details about the workplace can reveal a lot, as can what answers employers don’t want to give.

Ask about cell phone service (say you need to call a sick relative), sleeping arrangements, whether you can bring a friend, a crew, or drive in your own vehicle. Anyone looking for help should be as likely to take on two people as one. Asking if meals are provided, when is the next trip to town, and about the drug and alcohol policy can help trimmers know what kind of scene they’ll be arriving at. “There are good matches for every worker situation, if you like drugs don’t go to the place that doesn’t,” said Wilson.  She also recommended asking to be back in town after two to three days (say you have an appointment).

Wilson also warned that employers often can’t vouch for every person there. She added it was important not to be fooled by appearances: “just because it’s an amazing house doesn’t mean it’s safe,” and that knowing the scale of the grow and the quality of work required will give insight into the workplace. She pointed out that often times wild behavior by neighbors can bring law enforcement to neighboring properties.

Consider environmental factors and compliance issues as safety issues as well, Wilson suggested. While a cannabis farm working towards compliance with new rules may be a safer place to work, it doesn’t ensure good working conditions or a fair boss. Information about the grow’s water source can be important because drawing from a stream or other compliance issues might bring law enforcement. She also warned to watch for mold, which can cause respiratory problems, garbage and other hazardous substances. Garbage as well as old orchards or other environmental features can attract wildlife like bears, and trimmers should be prepared for wildlife encounters.

Wilson warned that grow scenes with firearms can present their own hazards, and are also a felony charge if law enforcement appears. She noted that if a trimmer knows the location of a firearms, that means any worker or person on the property could potentially decide to use it, and she shared stories of violent incidents where other employees or neighbors had used guns to threaten or harm workers or themselves during harvest season. She suggested that trimmers “stop freaking out over one helicopter,” adding that only multiple flyovers should cause concern.

As workers who may be standing on the street seeking to sell their physical labor, Wilson recommended this sex worker rule as useful for people seeking trim work. Never put yourself in a dangerous situation without considering the risks beyond the monetary gain, she suggested, and make sure to question a situation that seems too good to be true.

Be prepared to be self-reliant:

When taking work from a stranger, trimmers should try to discreetly take a photo of the license plate of the vehicle they are leaving in and send it to a friend. You should also tell a friend  where you’re going or with who, noting the mile marker when you arrive or on the way. Carrying bear mace, wasp spray, a lighter, and an extra cell phone battery are all good methods of self-defence from people (and bears and wasps). Bring your own food, water, and vehicle if possible, and try to have a backup plan or an escape strategy — like meeting a friend at an arranged time — if things go wrong.

Kelly Bond, a local with 30 years of trimming experience, wrote The Clippers Handbook: Harvesting the Emerald Triangle in 2015, and it’s full of useful tips for trimmers. You can find more information on the book’s Facebook page, and listen to her interview on the subject of trimming advice and dangers for women with Kerry Reynolds on Cannabis Consciousness News. Her segment starts at 9:20 minutes in.

In the interview, amongst many other useful tips, she suggests asking to be paid frequently, and recommends not mixing social circles, partying, and trimming work. Bond says to seek out growers who are straightforward and serious people who don’t have a problem answering questions. She also shares some tips for growers looking for workers.

Bond also talks about women in the scene and sexual violence how it’s portrayed in this environment, saying there’s been a recent increase in violence against women in the cannabis scene. She asks whether the cannabis community should “reconsider the old school thinking of we never call the cops for any reason,” adding that maybe it was no longer good to be  “a society of people that let anything hide behind a weed crop.”  She told women workers to “protect yourself, because no one is protecting you.”