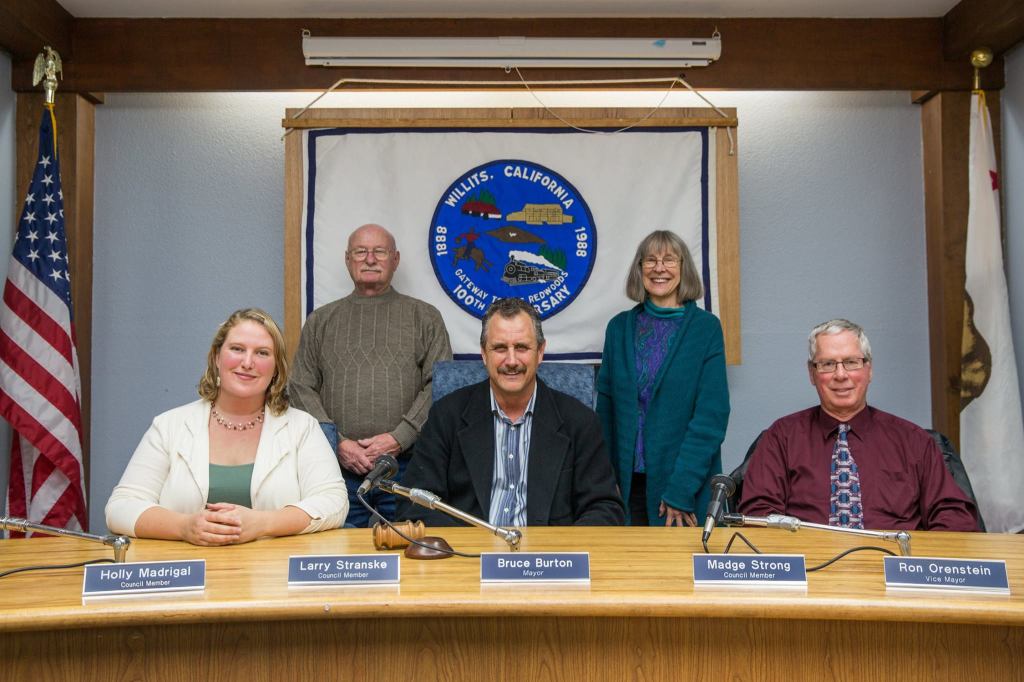 WILLITS — In a sparsely attended meeting, on Wednesday Oct. 26, the Willits City Council dispatched with some routine procedural issues, discussed a proposal for the post-bypass future of Main Street, voted to fix the roof of the Willits High gym, touched on water rates, and heard a report from the commercial cannabis policy development working group on the future of canna-business in Willits. About 17 people were in the audience, though that included staff and members of the press. 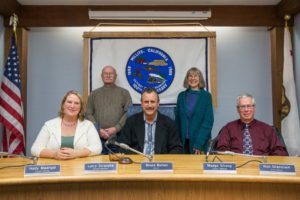 Though all five councilmembers were in attendance, Mayor Bruce Burton, and Councilmembers Madge Strong and Larry Stranske recused themselves from the presentation on the future of Main Street due to a conflict, Councilmembers Holly Madrigal and Ron Orenstein remain seated. After the presentation Burton noted that the city is  mere days away from a radical shift in traffic patterns, with the impending opening of the Willits Bypass. He suggested that decisions, and further serious discussion of parking and traffic flow, hold off for at least a few weeks until the effects of the bypass could be discerned.

A general pro-pedestrian feeling was voiced by the council, and some members of the public, though a couple of older people forcefully insisted that Main St. remain more car accessible. Said one woman who rose to speak, “Not everyone has got a bicycle, and not everyone is ready to walk a football field.” She added, “This is not amsterdam.”  In contrast, local businessman Pete Swanton spoke out in favor of a pedestrian-centric design.

The council approved a motion to authorize $45,000 for an assessment of water rates, to be conducted by Bartle Wells Associates, out of Berkeley. Though the vote to conduct the assessment passed, there was some back and forth about what principles should govern water rates in the city. Burton reiterated his idea that the city should attempt to sell more water. Said Burton, “I’m of the mind that we’re in the water selling business…Walmart figured out 50 years ago, you make more money when you charge less.” He believes that the city is not selling enough water and has too often erred on the side of caution, ending up at the end of the rain-year with too much reserve in the reservoirs.

Strong in turn rejected this idea, advocating for a shift in prices that would amount to a progressive fee schedule on water. By including the first “one or two” units of water in the base rate, and charging a higher per unit rate thereafter, she believes the city could, “shift the burden within the water bills…somewhat more equitably.” Adding that the large commercial and industrial users, “aren’t necessarily paying their fair share.”

Orenstein gave a report from the commercial cannabis policy development working group, describing their findings, which will inform the policies the city institutes to regulate marijuana cultivation. He began by saying that the group was, “Looking at the whole issue in a very methodical step by step manner.” He reported that they are leaning towards allowing indoor cultivation (up to 22,000 square feet’s worth), lab testing, and some value added production, such as salves and tinctures. Cannabis businesses would likely be required to operate in such a way that the whatever activities were happening indoors would not be apparent outside. He was adamant that no volatile extraction processes be allowed in the city, including butane and CO2.

The councilman appeared impressed with the potential revenues that could come from limited production in town. He said that he had been told at the meeting that a typical indoor marijuana grow can produce about $800 of revenue per square foot. Given that the working group is looking at allocating 22,000 sq. ft., that could add up to $17.6 million — in Orenstein’s words, “We’re talking some serious money here.”

But with that kind of money could come a set of perverse incentives. “One of the things that was pointed out, was that that’s a large amount of money and it’s very tempting to large operators to come in,” explained the councilman. He questioned whether the city would want a single larger operator to come in, or maybe two or three, or if efforts should be made to keep production small.

He also said the working group was leaning towards a model based on the City of Arcata’s, which would create one or more “enterprise zones.” Such zones would be the only places where cannabis related industry could occur. The creation of enterprise zones in Arcata became contentious in 2015, with many in that community alleging that such a designation would constitute a government concession to already wealth owners of industrially zoned land.

In his report Orenstein also said that the group was leaning towards limiting the number of licenses issued to operate in town, saying, “We don’t want to overload the town, and we don’t want it to become a one industry town either.” They decided that issuing licenses on a first come, first serve, basis, with the condition that applications and fees all be paid and complete, would be the most equitable.

Included in the permitting process would be some sort of background checks. As to the issue of whether prior marijuana convictions would disqualify someone on the basis of a background check, Orenstein made no comment.

Other concerns raised were the question of whether there should be clean and organic requirements, whether there should be energy and water conservation measures put in place, whether licenses should be limited on the basis of residency. Also noted was the possibility that applying stringent environmental and quality regulations might allow cannabis and cannabis products produced in Willits to bear a special seal. The working group is planning a trip to another city to learn about ways that regulation has already taken place.

The issue of whether the program would require an environmental impact report (EIR) under the California Environmental Quality Act (CEQA) remained unanswered. There was also some questioning of the legality of residency requirements.

The next public meeting on the issue will be held at council chambers on Nov. 15 from 4pm to 6pm.

Some other items that council dealt with:

The council also voted to replace the roof of the Willits High gym. They were informed that the roof of the roof is in disrepair, and in urgent need of a complete replacement. Due to the urgency of the work, the council voted to suspend normal bidding procedures and use an emergency bidding procedure to hire a contractor to do the work. Though the gym is operated by the school district, a separate government entity, the building itself is owned by the city, and city authorization was required to move forward.

Building Inspection and Code Enforcement Officer John Sherman explained that the roof has deteriorated from several decades neglect, and from being under a few oak trees. The old roof was a composition roof, the new roof will be a membrane.

Police Chief Gerry Gonzalez gave a brief statement urging all humans and small hobgoblins to be careful on Halloween, and noted that the west side of town can become congested.

City Planner Dusty Duley described a small victory in the City’s sometimes less than amicable dealings with CalTrans. The state transportation agency has conceded to the City on the question of freeway signage. After discussions with the CalTrans signage coordinator, the city will be getting most of the signs they want, including signs with logos and service signs. Many officials believe this will be important in maintaining the revenue stream provided by travelers. Duley said that discussions with the coordinator were amicable.

The council authorized a $31,731.25 expenditure to purchase a ROVVER X, a little rover mounted camera that can roll down the sewage pipes operated jointly with Brooktrails, to inspect them. The cost of the rover was shared with Brooktrails.

The city will be planting new trees in the park to replace the ones recently cut down. City Manager Adrienne Moore explained that the old trees had rotted out and posed a hazard. She added that a cross section of one of the trees is being kept at City Hall in case anyone wants to come see for themselves. The new trees are in 24 inch box containers, and are ready to plant.

Finally, Moore praised the City’s sewage department for hard-work and recent improvement. She said that though the plant has had issues in the past with contaminantes and algae blooms, improvements have been so stark that the department was recently featured as a success story in an industry journal the California Water Journal.