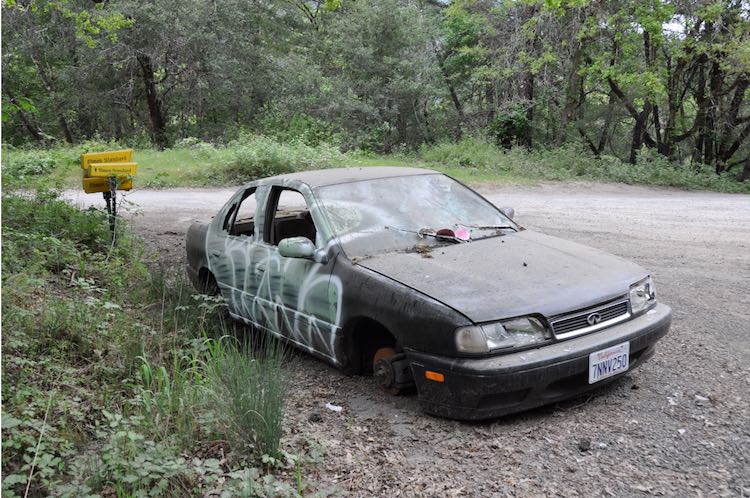 An abandoned car near Miranda, photo by Kym Kemp.

Seeing an abandoned car on the side of the road is not an uncommon sight in the Emerald Triangle, but what happens to those cars that get left behind? It’s not unusual to see a car left by the highway for months, but what agencies are responsible for vehicle abatement, and how much funding goes towards dealing with cleaning up abandoned vehicles?

Kym Kemp at our sister site, Redheaded Blackbelt, has taken a great look at what happens in Humboldt County with abandoned cars, including talking to county officials and the CHP. Kemp is seeking input from Humboldt County residents to better understand the scope of the problem, so she can pass on that information to county officials and find ways to improve the programs. Take a look at her story and story below and see what you think: is this a problem in Mendocino County?

Here’s the start of Kemp’s article, read more on her site at the link below:

Someone abandoned this car at the corner of Pine Drive and Thomas Road early in 2016. For weeks the car sat. By March, the wheels had been stripped, glass had been broken out, and bullet holes punctured the side. By April the vehicle had been reported to law enforcement several times. (This reporter called it in once.) A spokesperson for the California Highway Patrol explained to us that the vehicle abatement program only had a limited amount of money and the county quickly ran through that. New money, he said, would be allotted in the summer.

In August the car was still there. In September, several women in the neighborhood pooled their money and paid for it to be towed away. By this time it was covered in graffiti and stickers.

This car was not the only one. Dozens if not hundreds of cars are reported abandoned each year in this county. Some end up torched and volunteer as well as paid fire crews must rush to the scene often in the middle of the night to deal with the toxic mess. Then the burned hulks can sit for weeks before they are removed. Multiple readers have reached out asking us to address this issue.

One reader, Mark Speer, tells us he approached his county supervisor. “I was told that the budget is 40 grand a year and that it gets used up very quickly and then there is no more money….When I asked how the budget was established or how it could be expanded, I was met with silence.”

Read the rest of the article on Redheaded Blackbelt here.