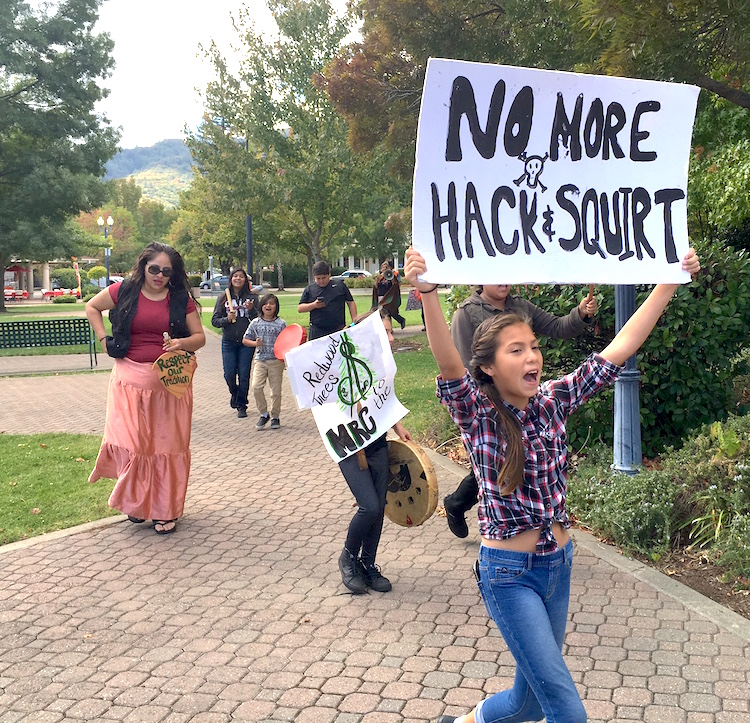 “It’s been a wonderful thing,” said Marggie Chandler, one of the organizers of the “Let Our Forest Heal” protest, as they marched into at Alex Thomas Plaza in Ukiah. From Saturday until Tuesday the group trekked 54 miles on foot, four days altogether from Comptche to Philo to Ukiah, to protest the practice of “hack-and-squirt,” a controversial forestry management practice banned under Measure V last June by 62% of Mendocino voters. 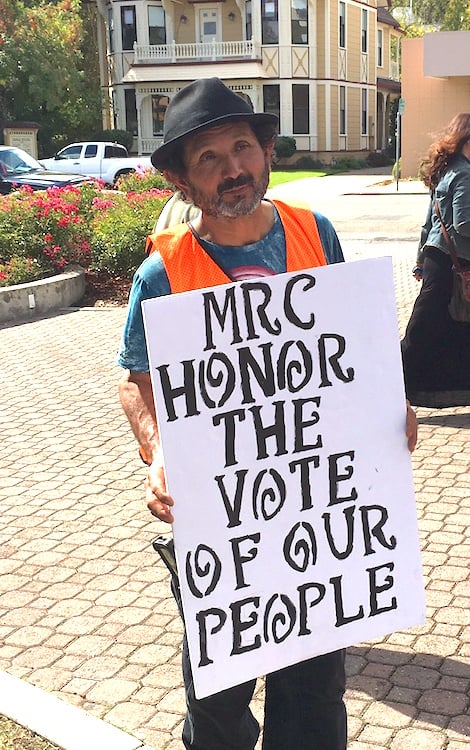 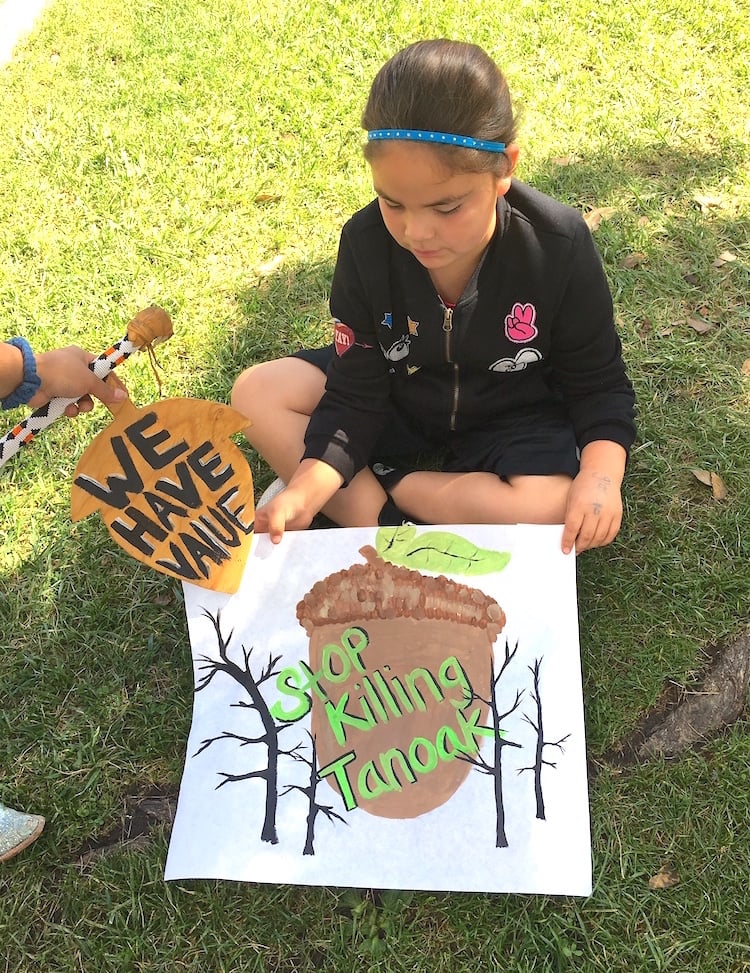 The Point Arena Band of Pomo Indians plans to revive a traditional acorn ceremony on October 22 to teach the importance of acorns to the younger generations. 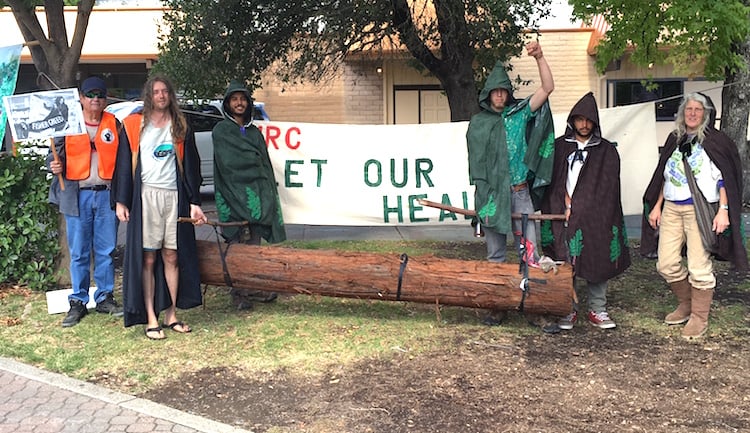 Some marchers who carried a redwood log on the route pose in front of their "Let Our Forest Heal" banner. 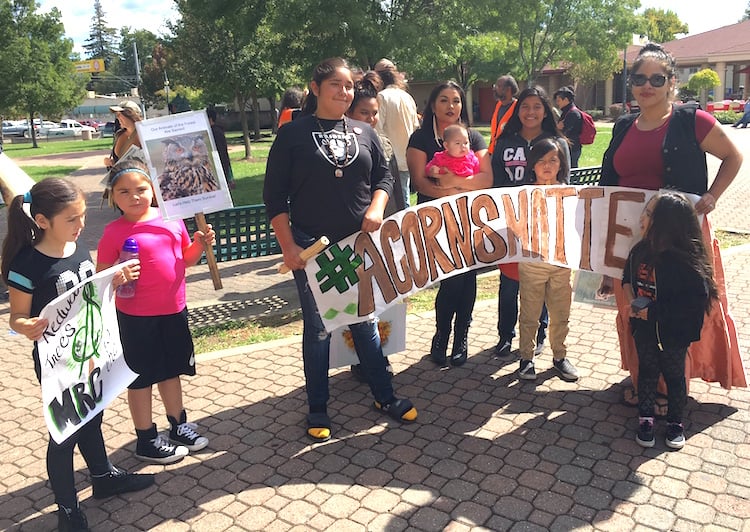 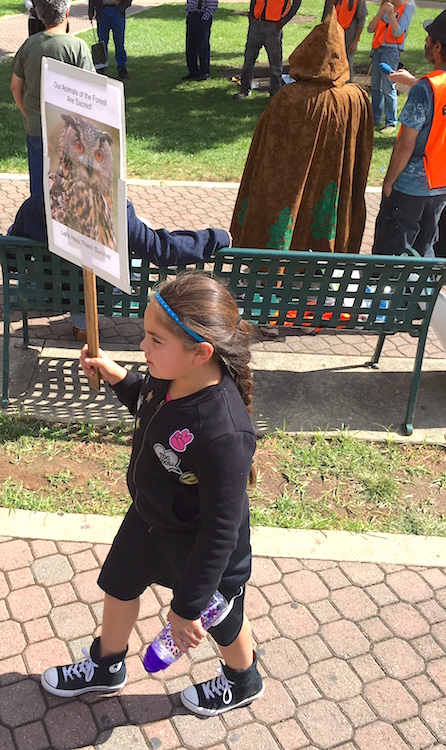 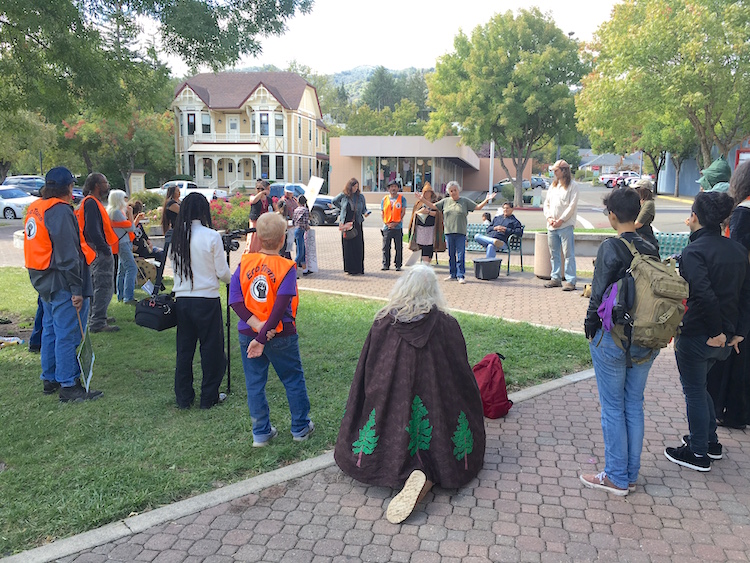 About 30 marchers and supporters held a brief ceremony after the walk on October 4. 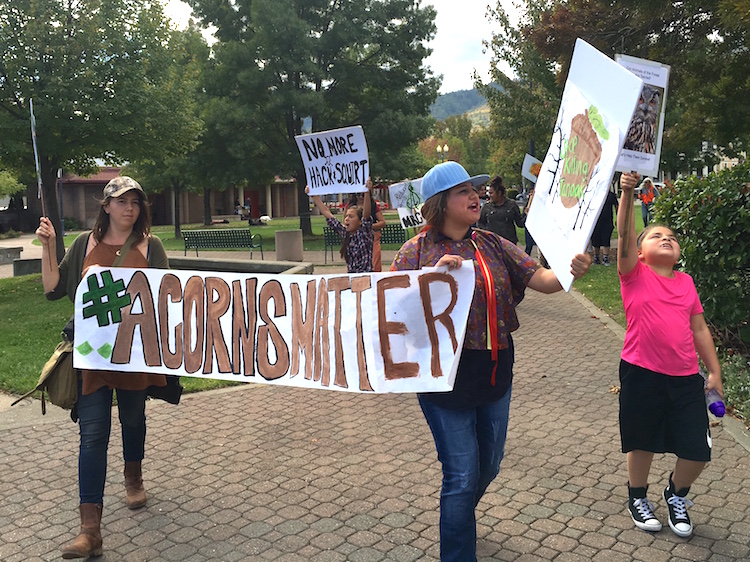 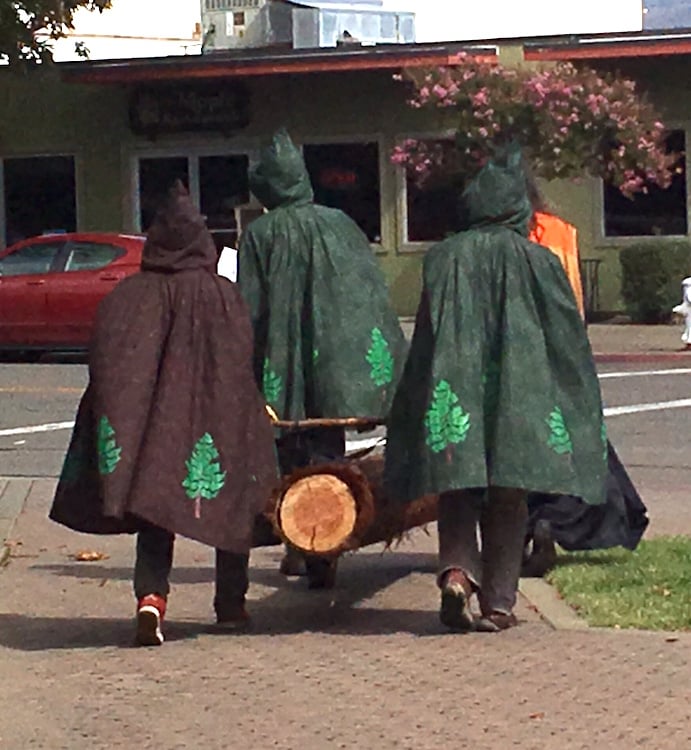 Some of the marchers carried a redwood log along the 54 mile journey to the MRC log deck in Ukiah.

The number of marchers fluctuated between 12 and 20 members despite the first fall rains. Some wore hand-painted cloaks, green and brown, depicting conifer trees and a small group of young men took turns carrying a six foot redwood log and tan oak branches. They walked along the 128 and the 253, greeted by supporters and camping out until they reached Ukiah, where their final destination was the log deck at the Mendocino Redwood Company.

Throughout the summer local activists have called for the enforcement of county Measure V, which forbids timber companies from leaving tan oaks and madrones still standing but dead as they harvest more valuable wood. Activists allege Mendocino Redwood Company is continuing to “hack and squirt” on the more than 220,000 acres the company owns in the county, though the press release from the march states:  “MRC has stated that V does not apply to them, arguing only the State has authority to regulate herbicide use. MRC has until Oct. 22 to file for an injunction against the public nuisance ordinance.”

At the march’s conclusion on Tuesday, around 30 people gathered for a brief ceremony at the plaza, including members of Earth First!, the American Indian Movement, and the Point Arena and Coyote Valley Band of Pomo Indians, some of whom carried a large banner proclaiming “#ACORNS MATTER” to bring attention to the importance of oak forests within the cultural heritage of the local Pomo. The group then walked to the MRC log deck to hold a brief protest to conclude the action.

Girvin said last week youth from Coyote Valley, from first grade through high schoolers, had been out gathering acorns to learn about their tribe’s heritage. “There’s a joy in seeing the young ones who are learning about the value of the acorns,” she added.

Bernadette Smith, a tribal member of the Point Arena Band of Pomo Indians explained the group would be reviving a traditional acorn festival to be held in Point Arena October 22, an event she said had not been held in her lifetime and “even my father cannot remember the last time this happened.” She emphasized the importance of the reviving the tradition, adding, “it’s been destroyed, but it will be restored.”

The Point Arena Pomo plan to hold the acorn ceremony at the old Air Force station, although the group has had difficulty determining who owns the property, which is was historically a traditional gathering point. Smith said the site is of particular significance since it borders a Mendocino Redwood Company property where logging is ongoing.

After the ceremony at the plaza, marchers headed to the Mendocino Redwood Company for a final protest action to conclude the event.