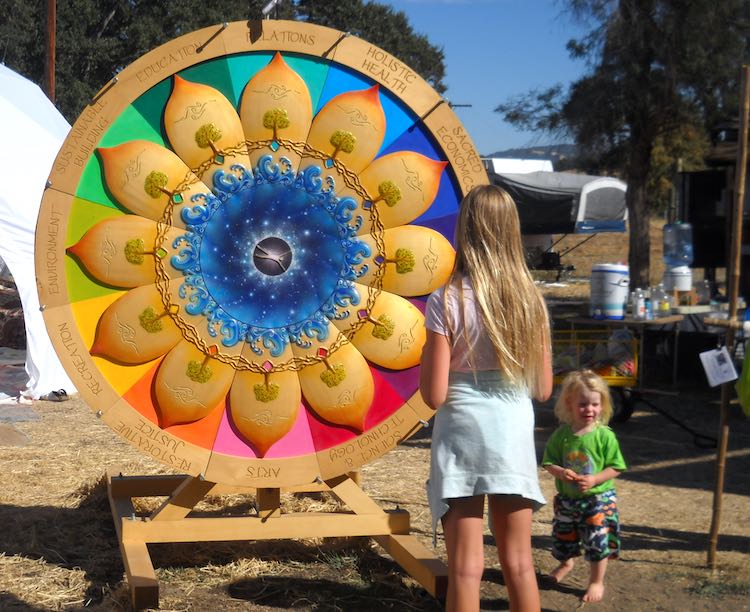 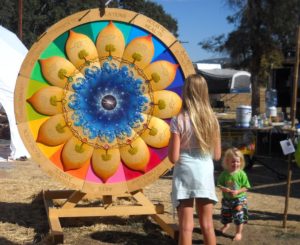 The wheel of fortune – Sarah Reith

HOPLAND — Activists, gardeners, artists, and the merely curious streamed into the Solar Living Institute(SLI) for the fourth day of the annual North American Permaculture Convergence, hosted by the Northern California Building Resilient Communities Convergence. The Convergence is an event that sprawls across the grounds of the SLI every year, drawing diverse speakers to explain how their disciplines fit into permaculture. It’s like a conference, mixed with a fair, with campgrounds and solar panels and a sculpture by Diego Harris too enormous to be truly whimsical. Early in the afternoon, a couple danced in the shallow pool in the plaza as children chased each other with buckets of water and small groups of adults held important discussions in lowered voices. 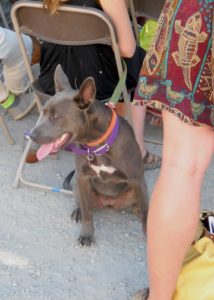 What are the humans sayin’? – Sarah Reith

This is the third year the event has been hosted at SLI. Previously, the convergence was held at a different location each year, which meant, as organizer Joshua Angelo Silva, put it, “each time, we had to relearn the structure and figure out” how best to adapt the party to the grounds.

Nobody has a perfect definition of permaculture. Some see it as a philosophy, others as a set of practical tools, a worldview, or even a way of life. Matching the use of a place to its natural features is an ongoing concern for “permies.” As Silva puts it, permaculture stresses principles of caring for people along with the planet, and making sure everyone gets a fair share. So while catching rainwater and reusing greywater are examples of caring for a physical resource, the social side would be something like throwing a block party, figuring out who has what skills and matching them with needs in the community. 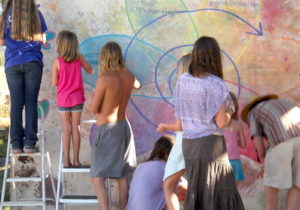 People of all ages collaborate on a mural – Sarah Reith

Still, the definition of permaculture is very much a work inprogress. According to the Regenerative Design Institute, which teaches permaculture skills, the movement focuses on personal health and environmentally sustainable approaches to gardening, water management, and community building. Homesteading skills like beekeeping and botany are emphasized, as are non-violent communication, yoga, and meditation.

Classes at the fair have titles like, “Lessons From Planting Justice,” and “Gardening: The Little-Known Path of Effective Activism.” Most of the first day’s schedule involved working groups on the theme of this year’s convergence, which was building bridges between various facets of the permaculture movement and those involved in other communities or practices. Lecturers also offered classes on specific skills, like how to design a garden in a drought or build a hedgerow. Some of the attendees were collaborating on a large mural. A few shade structures and a stand-alone arch were decorated with flowers, twigs, ribbons and gauze.

Silva offered the analogy that putting on the Convergence is “like throwing a party for 400 of your closest friends.” He said it takes a core team of nine organizers, plus an entire “species of volunteers,” six to eight months to plan the event, which he described as “a microcosm of what our world could look like,” were the world following the principles of permaculture. 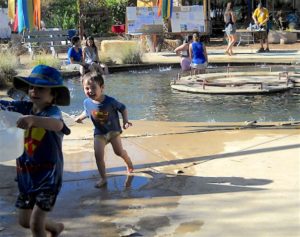 Economic justice, or “fair share,” is one of the principles of permaculture, but this is an aspect where the patterns of standard economics appear to be very much in place, with the full-price tickets for the event reaching the $500 range. Silva explained that knowledge freely given, or through low-cost apprenticeship programs, is one way perma-culturalists seek to further knowledge of their methods. Asked about the abuses that have traditionally been associated with apprenticeship programs, he replied that the permaculture movement is characterized by “giving and receiving feedback,” and advised against getting involved in situations that are self-sabotaging.

Abeja Hummel, of Emerald Earth Sanctuary, has been involved in the intentional community movement for 18 years. She put down her basket on her way to serve as a panelist and gave a general overview on the currents she has observed in the movement during the time she has been involved.

Hummel recalled that the movement “went from, let’s all love each other, to a very logical endeavor.” Adding that more recently there’s been a shift towards “a deeper connective process,” that is more focused on community members supporting one another than simply running an effective meeting. “Maybe that’s a shift in me,” she reflected; “but I want it to be a shift in the whole movement.”

That movement is not confined to rural sites like SLI and Emerald Earth Sanctuary. Sixteen-year-old Kyziah Shavers, of Phat Beets Produce in Oakland, said she has been making pickles and juice since she was ten years old. Phat Beets, a play on words involving highly enjoyable music and root vegetables, is a city-based program aimed at connecting city dwellers with small farmers, promoting urban agriculture, and combining sustainable food-production skills with the pursuit of social justice. Shavers, who raises chickens and vegetables in the backyard of her West Oakland home, said she likes working in her garden, because there, “you just grow what you need for yourself.”

Shaver and Hummel both emphasized the social aspect of the permaculture movement. But another element is the physical environment, within which beekeeping is heavily emphasized. Alison Paskal, a beekeeper at the Ashby Community Gardens, was on hand to address the topic. While the human community is a big component of the project, Paskal was ready to talk about the bees, butterflies, bats and hummingbirds that are attracted to the flowers in the urban pollinator garden. She was sitting behind a table festooned with entomologically accurate illustrations of many of these creatures in various life stages, and she wore a T-shirt with a picture of a large caterpillar in the shape of a question mark.

While honeybees are not native, many bee species are, and they require diverse living arrangements. For example, Paskal displayed a set of bamboo reeds that would make a fine habitat for Mason bees. Some kinds of bees live in the ground, and there is a range of bumblebee specific to certain plants. In the pollinator garden, Paskal tries to provide a variety of flowers to promote the health of all these creatures.

Her description of the intricate needs of the animals that pollinate food sources was an almost irresistible analogy for the human condition: with a wide variety of the right kinds of food and a highly organized social system, it sounds like it should be perfectly reasonable to expect health, peace, and prosperity.

“You don’t have to be a die-hard permie,” she said. “Just take time to observe the existing land.”
Sarah Reith, 17 September 2016