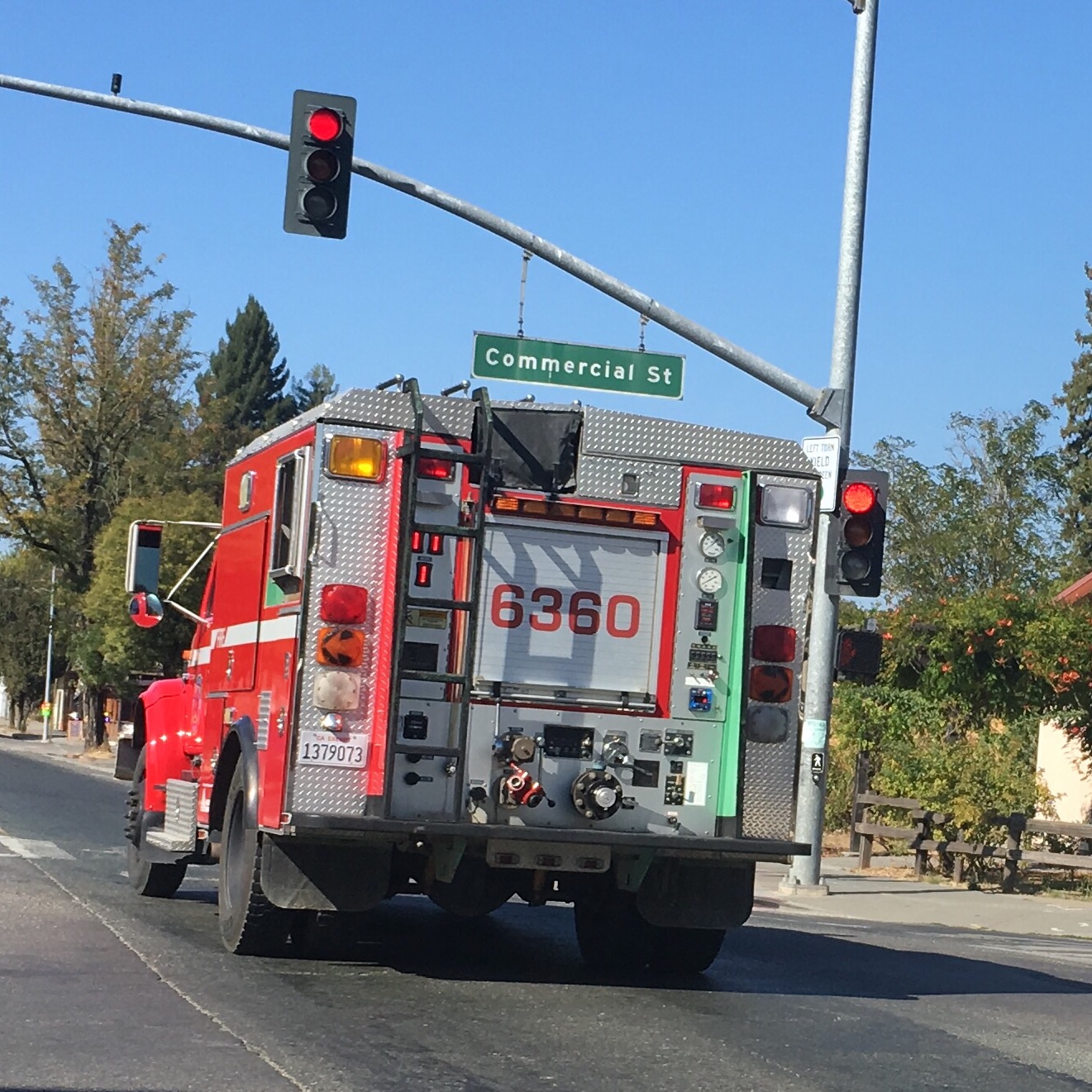 A fire truck races through Willits on it's way to the blaze north of Laytonville - photo by Kate Maxwell.

Calfire’s evening report states that the Ruff Fire remains at 50 acres, but has reached 95% containment.

CalFire is now reporting the Ruff Fire is 80% contained and remains at 50 acres in size. The Lost Coast Outpost reports that AT&T released a statement attributing the loss of some services in Humboldt County on the wildfire, but The Voice has not verified this statement.

Calfire says the Ruff Fire has now grown to 50 acres but is 40% contained. A communications officer from the Mendocino Calfire Dispatch told The Mendocino Voice that voluntary evacuations occurred off Woodman Creek Road when the fire started around 2 p.m., with 8-10 fire apparatus there to assist with the evacuations. However, “it’s winding down,” he said, adding that while there were at one point six air tankers and two helicopters on the scene, the tankers are now being called back. Calfire Sacramento said the air attack and a Forest Service helicopter will remain for now.

Locals are sharing stories on Facebook, including updates from those who saw the fire start and decided to stay put while the voluntary evacuations occurred. Like in many emergency situations in our rural area, stories abound of neighbor helping neighbor and residents joining in to put out spot fires.

Kym Kemp shares one of these stories at Redheaded Blackbelt, detailing how a few Laytonville residents were able to help out just in time to protect a structure in the impacted area. Check it out here!

The 101 has been opened according to the CHP incident page, and according to Kym Kemp some aircraft have been pulled back from the fire.

The fire burning at roughly the intersection of the 101 and Woodruff Rd., now being called the “Ruff Fire” by CalFire, is currently at 30 acres with 5% contained, according to a CalFire spokesperson. CalFire, Laytonville Fire, Little Lake Fire and Ukiah Fire have all responded. CalFire’s Air Attack, along with three tankers and a Forest Service helicopter have also been on the scene.

Traffic remains blocked where the fire is straddling or near the 101, and the CHP has not provided an estimate of when it will be cleared. Traffic is blocked south through Laytonville and CalFire indicated it could be several hours before the road is reopened.

The fire began just have 2pm and according to some reports has threatened several structures.

If you have any tips or photos please email [email protected], or tweet us @themendonews.

We will continue to update as new information comes in.

We’re also cross-posting Kym Kemp’s reporting on the this breaking news. Check her page for updates and accounts from local residents. From Kemp:

According to the California Highway Patrol Incident page, a fire is burning north of Laytonville and south of Camp WinnaRainbow. Emergency personnel closed Hwy 101 at 2:21 p.m. as flames spread to both sides of the road.

See more updates and great photos on her site here.