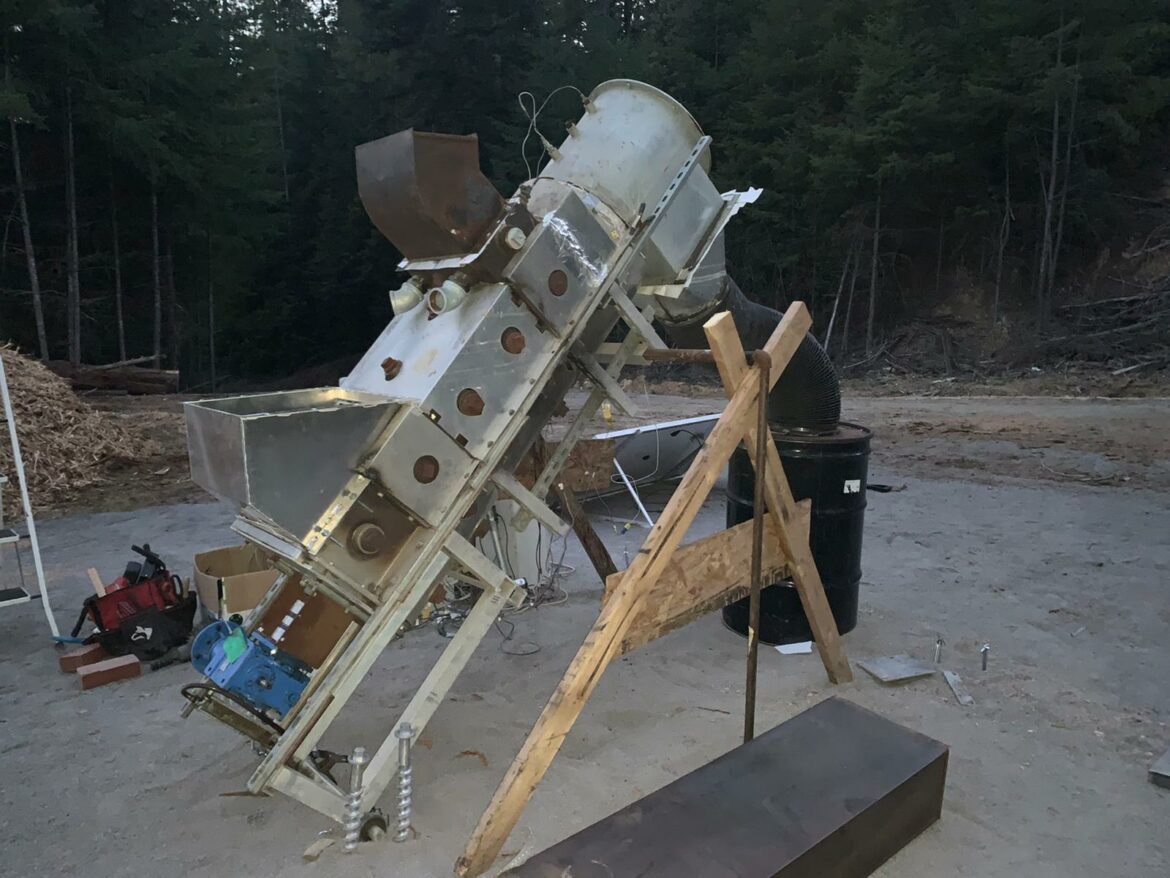 A prototype that takes slash and agricultural residue and turns it into things farmers and loggers can sell, such as biochar, sits in Jackson Demonstration State Forest on Oct. 12. Researchers were testing it out in the field before the rainy season starts.

MENDOCINO Co., 11/7/21 — Scientists and engineers around the world are trying to figure out ways to mitigate future climate risks, and many have been rushing to develop technologies that reduce carbon emissions. One prototype being tested in Jackson Demonstration State Forest (JDSF) could have major implications for reducing global air pollution in the future. In the present, they’re looking for local farmers and timberland owners to work with.

The startup Takachar, based out of both India and the Bay Area, is testing a prototype for a small-scale, low-cost portable system that can turn slash, or trees cut down from logging, and agricultural residue like rice husks into products like soil amendments (biochar) to improve nutrient and water retention, biofuels as an energy solution, or chemical precursors. The goal is to incentivize loggers and farmers not to engage in polluting behavior like leaving behind or burning residue — that’s another word for biomass like slash and agricultural waste in the form of rice husks, hay straw and wood chip, for example — by turning that residue into something they can sell. The prototype can be attached to a tractor or pickup truck, which is expected to make it easier to transport and use in more remote areas.

“Most residues are often very loose, wet and bulky,” said Kevin Kung, co-founder and chief technology officer of Takachar, “so we’re talking about crop and forest residues, which often makes them very difficult to transport and centralize. So if you’re on the farm, often what you have to do is burn down residues in the open air and if it’s in a forested area, the buildup of that residue can exacerbate wildfires. So in both cases, it’s not only a waste, but also a lot of pollution that could be caused because of the burning and so forth.”

The prototype allows the residue to be processed on-site. It also lays the groundwork for self-sustaining communities that don’t need these commodities imported from elsewhere, Kung said. Kung and his co-founder Vidyut Mohan already ran one successful pilot program with almost 5,000 farmers in Kenya, where the carbon-rich fertilizer they produced increased their yields by 27%. Right now, Kung said the startup has a couple pilots running in rice paddies in India alongside the one in the Jackson State Forest in Mendocino County. They’re using this opportunity to learn how to adapt the technology so it can translate from the lab to real-world settings.

“Before, I did not know how an actual forest operation looks,” Kung said. “ We already identified some of the workflows and some of the things we have to change for the reactor. Really, just learning here are the different machine forms you have to work with in a real vegetation management setting, what these teams would normally use. Thinking about, well, if people are using this type of Bobcat, how does it load stuff? And if people are chipping things, then how can we potentially take the output of that directly into our reactor?”

This could have major implications in a lot of forestry settings. For instance, utility companies clearing brush and trees from around their power lines would have an incentive not to leave that residue behind. The startup is currently working with JDSF to process “small-diameter, non-merchantable redwood residues from their forestry operations, as well as the tanoak as an invasive species,” according to an email from the Takachar team. It has “also been working with a (Pacific Gas & Electric) chip yard near Willits to test the suitability of some of their residues that would otherwise be costly to dispose of.”

People have been putting charcoal in their soil for thousands of years and biochar from forestry in particular is known to increase the ability of the soil to hold onto nutrients, said Caroline Masiello, director of environmental science at Rice University and a biochar expert.

Biochar can also reduce carbon dioxide emissions by turning residue that would have otherwise rapidly decomposed and turning it into something that decomposes more slowly, she said. Saw dust, for instance, is a great source for biochar because it would decompose to CO2 very rapidly but doesn’t decompose to CO2 if it’s converted to charcoal. However, Masiello said it was important to make sure the trees being used to make the biochar weren’t serving other important ecosystem services in the forest in order for that behavior to make sense as a climate risk mitigation strategy.

Globally, the technology has also gotten some major attention. Takachar recently won one of the five inaugural Earthshot Prizes. That’s an award launched by Prince William intended to support projects that are addressing the climate crisis with 1 million British pounds, or just under $1.4 million. Watch the award ceremony here. “The burning of agricultural waste is one of the biggest drivers of city air pollution, but it doesn’t get the global attention the issue needs,” said Jason Knauf, CEO of the Royal Foundation of The Duke and Duchess of Cambridge. “Takachar’s game-changing solution presents a way to not only eradicate the air pollution that would otherwise be created by burning, but to do so profitably in a way that benefits farmers. They have shown great leadership in one of the areas worst-hit by air pollution, which we hope will inspire others to address this urgent issue.”

The researchers are planning to demonstrate the prototype for interested members of the public in the spring. Farm and forestland owners who want to participate in the pilot program can email Kung at [email protected] or [email protected].