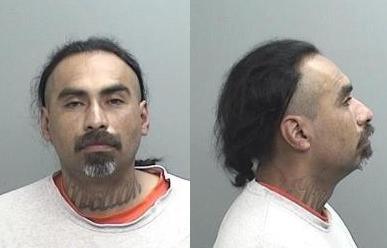 UKIAH, 12/5/18 — Negie Fallis, the primary suspect in the disappearance of Covelo woman Khadijah Britton, has been sentenced to four years in state prison for being a felon in possession of a firearm, having pled no contest to the charges on Oct. 9. Fallis, who had been out on bail, was taken into custody at the courthouse in Ukiah, after the sentence was handed down in Mendocino Superior Court yesterday, Dec. 4.

The charges arise from an incident that occured during his arrest, on February 19, on charges related to an alleged attack on Britton, which were later dropped. The attacked is alleged to have happened in January.

Fallis appeared yesterday for his formal sentencing, and was taken into custody for a four year sentence, of which “probably two will be served,” according to the Mendocino District Attorney’s spokesperson Mike Geniella.

Antonia Bautista-Dalson, his current girlfriend, has also accepted a plea deal for being his accomplice in hiding the firearm during his January arrest. She is scheduled to be sentenced in court on December 11.

No charges have been brought by the district attorney’s office related to Khadijah Britton’s disappearance in February of this year, and the 24 year old woman has not been seen since, despite ongoing searches by law enforcement and community members. The Mendocino County Sheriff’s Office along with the Federal Bureau of Investigation, the Round Valley Tribal Police, and Britton’s family members will be holding a press conference about Britton’s disappearance this Thursday, December 6, at 2 p.m. at the Mendocino Superior Courthouse in Ukiah. The Mendocino Voice will livestream the press conference on Facebook.

The Mendocino County Sheriff’s Office continues to seek any information related to Britton’s disappearance, and her family is offering an $85,000 reward for any information that helps find her. Anyone with information about Britton should contact the MCSO tip line at (707) 463- 4086 or the tip line (707) 234-2100.

You can read The Mendocino Voice’s complete coverage of Britton’s disappearance and Fallis’ legal proceedings here.