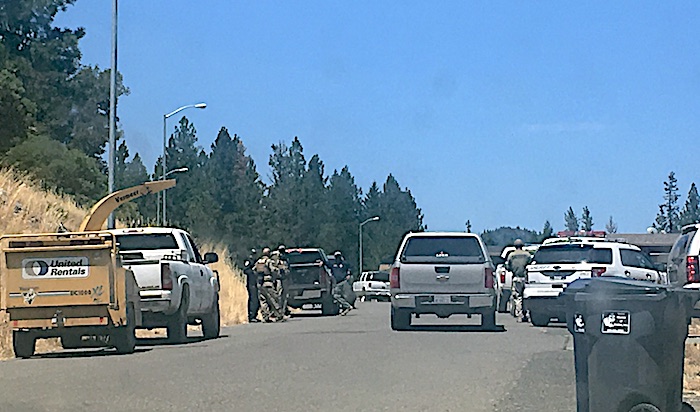 WILLITS, 7/27/17 — Tuesday, July 25, a joint team of local and federal law enforcement officers raided the eastern property of the Sherwood Rancheria, in the Willits-Little Lake Valley, arresting six people and cutting down 2,421 plants. Interviews with neighbors give the impression that a very large grow had been operated for some time on tribal land, by a member of the tribe, though often using non-tribal workers. One resident also complained of excessive water use that effectively left other members of the tribe without water at times, and other environmental problems.

Asked for comment the Chair of the Sherwood Tribal Council Michael Knight refused to answer questions, saying only that he does not give interviews. However, Captain Greg Van Patten, who acts as public information officer for the MCSO, said in an interview, “The tribal council approached us asked us to enforce marijuana laws.” He expanded, saying that the MCSO has the authority to enforce state and local law on tribal land pursuant to a federal law, Public Law 280. He added that, though it is the sheriff’s office’s stance that they are not required to contact the BIA to operate on tribal land, they do coordinate.
(Continued below) 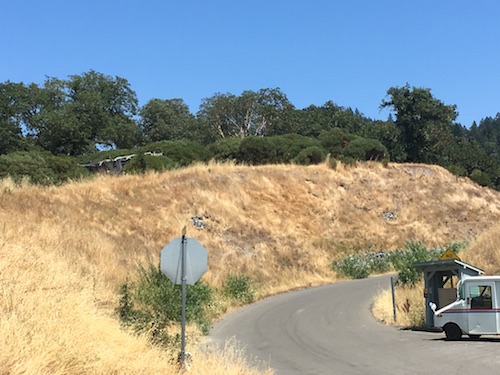 At the meeting of the Mendocino County Board of Supervisors on July 10, Sheriff Tom Allman spoke to the board and indicated that his office would be continuing to raid through the summer, and addressed tribal lands specifically, saying, “The Bureau of Indian Affairs will be working with the sheriff’s office this summer on some out of control grows on some of the 11 Indian rancherias and reservations that we have in our county. The fact that other people are approaching Native Americans for the purposes of leasing land, and thinking they can get away with it, under the guise that it’s being grown on federal land, is not going to work in this county…”

The raid occurred off Mitomkai Rd. on the eastern section of the Sherwood Rancheria, which is the land of the Sherwood Valley Band of Pomo. The rancheria is comprised of a cul-de-sac subdivision of about 15 suburban style houses, closely spaced together, with many acres of land around them. On these hilly acres were several sizable marijuana grows, the fencing of which could be clearly seen from East Valley Rd. in the Little Lake valley. An article in the Ukiah Daily Journal states that 25 weed gardens were raided, but it is unclear exactly what this means, given that the land is one communal parcel — the press release issued did not specify a number of gardens.

One tribal member and resident of the rancheria, and her relative, spoke to The Voice about the raid, on condition of anonymity. The Voice did confirm that she is a resident of the rancheria. This resident grows 25 plants in her backyard, and did not have them cut down. Other sources indicate that some number of people with smaller grows had their crop spared as well, though the exact number is unclear. The morning of the raids the resident woke up to the helicopter surveying the area, sometime between 7am and 8am, and decided to leave. When she returned she entered her backyard nervous to see what had happened, worrying aloud that her plants might be gone. But she was pleasantly surprised, finding her 25 plants all intact.

The resident described an increasingly tense situation, as a member of the tribe began to develop ever larger grows and bring in workers, most of whom, she said, were not tribal members themselves. She described a scene with strange cars and men present on this rural, and self-contained block. According to this resident, the tribal member primarily responsible for the grow had gone to other members asking if they would rent land to him for many thousands of dollars a pop, and that some had declined and some had accepted.

“They’re not respectful of our land whatsoever,” said the woman, going on to detail how they had used the communal water supply to water the thousands of cannabis plants, draining it, and leaving residents temporarily without water. She said that she believed the grow had contributed to environmental damage, noting her belief that the land is not owned by this generation but borrowed.

Talking about the tribal member who had instigated the large grows she said, “This one guy, he fucked it up for everybody.” Her relative nodded in assent, adding, “He got greedy.”

Said the resident, a little sheepishly, “I’m kind of glad it happened.”

She added that she had nothing against cannabis, or growing, and that not only does she grow, but her mother had, and that many relatives found cannabis growing to be a lifeline in difficult times. But amid the talk of greed, and prudence, one theme that the resident, and her cousin, both came back to was the question of what is actually allowed under the current laws of the county, state and federal government. Given overlapping jurisdictions, the muddiness of the county and state laws, and the idea that the tribes retain some sovereignty, many people remain confused.

The MCSO press release states that six people were arrested in the raid. Here they are along with their alleged crimes: Rudolph Esquivel for violating parole; Dennis Hoaglin for being a felon in possession of a firearm; Gary Robinson for cultivation of marijuana by sex offender; Robin Phillips for cultivation of marijuana by sex offender, being a felon with a firearm and being armed during a felony; Patrick Welsh for resisting arrest; Gregorio Martinez Guzman for possession of cocaine.

As is often the case in Mendocino County, COMMET was accompanied by a rented helicopter. An interview with the fuel truck operator, parked near the scene of the raid, confirmed that the helicopter company providing the rental was A&P Helicopters, out of Richvale in Butte County.

In a brief phone interview Vickie Compton, president of A&P, stated that the cost of a helicopter rental, for the class of copter rented by the MCSO, is $950 an hour, and that the MCSO does not receive a law enforcement, or bulk rate discount. She stated that they rent to other law enforcement agencies in the area, that the MCSO generally rents for about six hours at a time, and that the rental cost includes the pilot. It’s unclear exactly how many hours the copter operated yesterday, but The Mendocino Voice saw it flying between 2pm and 2:45pm, and other people report seeing it perhaps as early as 7am — which would put the cost of rental at at least $7000.

The fuel truck operator said that Sergeant Bruce Smith was flying in the copter that day, that the copter had been used for observation and, as is visible in a widely shared video, to lift out large amounts of destroyed plants. He also pointed out that the helicopters can go about two and a half hours between refuelings, have a range of about 300 miles, and have a top speed of around 120mph. The fuel truck tags along to provide refueling for the helicopter, and is often parked near where law enforcement is operating, however, the copter and pilot make the trip from Butte County by air. The truck was a white pickup, with an A&P logo on the side, and a fuel tank and mechanism in the bed.

It is uncertain which kind of helicopter was being used, but it most closely resembles the Bell 206B3, from A&P’s website.

The MCSO has previously raided the Pinoleville Rancheria and the Hopland Rancheria, who then began legal proceedings against the county.

Here is the press release from the MCSO:
(sorry if there are formatting errors, we have had some tech issues.)

On 07-25-2017 the Mendocino County Sheriff’s Office conducted a marijuana investigation/eradication operation on the Sherwood Valley Rancheria (22000 block of East Side Road in Willits, California) at the request of the Sherwood Valley Tribal Counsel.

The operation lead by the County of Mendocino Marijuana Eradication Team (COMMET) resulted in the following seizures:

Less than a half of gram of cocaine

More information will be made available by press release at a later date.