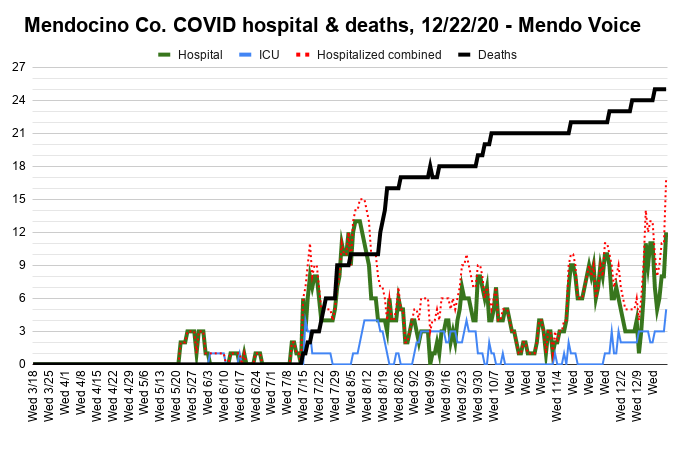 This graph shows people in regular hospital beds in red, people in the ICU in blue, and deaths in black. The dotted red line is the sum of normal hospitalizations and ICU patients giving total people in hospital.

WILLITS, 12/23/20 — The worst surge in new COVID cases yet seen in the United States continues, with a record 3,239 people dying of the disease yesterday, for a total of about 323,000 deaths so far this year. Nearly 1 in 20 Californians has tested positive for the disease.

Local and national health officials are strongly urging people to stay home for the holidays, to not visit family for Christmas, and especially to avoid New Year’s Eve parties. Officials worry that yet another surge onto of the existing surge would push the state’s health care system completely beyond capacity.

As is visible in the graphs below, since late October we have seen a tremendous surge in new cases, with a rapid acceleration in the case rate (that is, number of new cases per day) up until mid-December, at which point the case rate appears to have leveled off, at a much higher daily rate. Since then, new cases per day have hovered in the 30 to 34 per day range (on average). The number of total confirmed cases of COVID-19 has doubled during this latest surge, from 1142 on October 27, to the current 2292. On that date 21 people had died of the virus in Mendocino County, and the death toll currently sits at 25. But given that it often takes several weeks to progress from infection to death, the death rate ends up being a “lagging indicator,” trailing infection surges.

Northern California, including Mendocino County, remains the only region of the state to have avoided the far more stringent stay-at-home order, which has been pegged to excess ICU capacity. While the rest of the state has seen ICU capacity dip to 0%, our region still has roughly 29% of ICU beds open, as of last night. However, as transfers from worse hit areas filter into local hospitals, this could flip quickly.

The county of Mendocino residents currently hospitalized due to COVID hit an all time yesterday, with 12 in regular hospital beds and five in ICU. However, it must be remembered that these statistics are the count of Mendocino residents who have been hospitalized — and some of these people are often hospitalized out of county. The number of people in Mendocino area hospitals with COVID is often higher, especially given that the level of care in Ukiah is significantly higher than in Lake County.

One silver lining, albeit a somewhat tarnished one, has been the introduction of the Pfizer vaccine, and the impeding Moderna vaccine. Distribution of doses to frontline medical workers began last week, though it will likely be summer before the vaccine has been distributed to enough people to return some sense of normalcy. If you have questions about the vaccine check out this Q&A we did with a local expert Dr. Matthew D’Anis of Howard Memorial Hospital.

In terms of the demographics of people contracting the disease what we are seeing is the reversal of some trends as the virus spreads more evenly through the population.

Specifically, whereas early in the pandemic Latinos and Natives were far more disproportionately affected, whites are now contracting the disease at much higher rates, narrowing the gap between the racial groups. So while Latinos make up about a quarter of the population of Mendo Co. they now make up only 57% of COVID cases, down from a high of 66%.

Likewise, early in the pandemic the disease was highly localized in the Ukiah area. During this latest surge other regions of the county are beginning to catch up.

And, while a far greater number of women have contracted the disease than men in Mendocino County, that trend has been less stark in this surge. And the discrepancy is essentially stable, meaning that since this new surge men and women are contracting the disease at about the same rate.