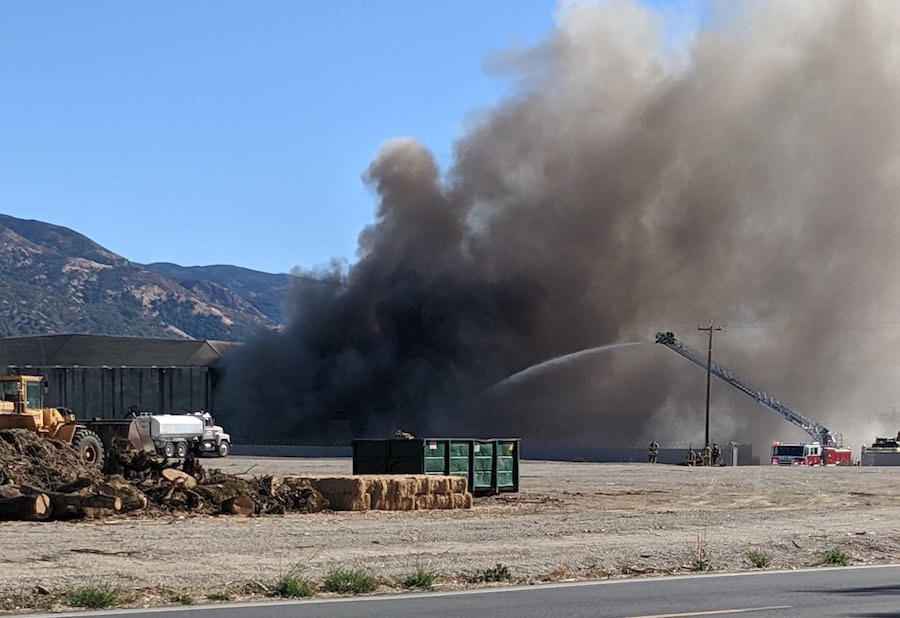 UPDATE 2:10 p.m. — The fire is now contained, although it may take a while to fully clean up the area.

Here’s some photos from earlier taken by reader Caroline Keller from across the street from the fire.

UPDATE 2 p.m. — We need to make a correction, the fire is actually burning at C&S Waste Solutions, not at MendoRecyling, and not at the transfer station. That location is on the east side of Taylor Drive, right near the off-ramp from the 101 to SR 253.

UPDATE 1:45 p.m. — Crews Environmental Health are on the way to the fire to make an assessment about the possible dangers of the industrial smoke might be producing, no official scientific word yet, but many readers have commented on a bad smell and that the smoke resulted quickly in a sore throat.

The fire is contained to the pile, but the pile appears to include not only scrap metal, but also appliances that might have plastic on other flammable parts. Fire crews are trying to separate up the pile so that they can attack and smother smaller sections.

UPDATE 1:30 p.m. — The fire is burning in the outdoor scrap metal pile at the a C&S Waste Solutions property on the east side of Taylor Drive near the off-ramp from the 101 to the 253*, not the Taylor Drive transfer station, and no structures are threatened. However, the fire is putting off a noxious smelling black smoke, and may be harmful.

MENDOCINO Co., 10/21/19 — A fire is burning on Taylor Drive at the south end of Ukiah, with a large plume of smoke visible from U.S. Route 101. The fire is being called the “Taylor IC” and Ukiah Valley Fire is currently responding. It appears that the fire is burning at the Ukiah transfer station, and the dense black smoke indicates that it may be some kind of industrial fire.

This is a developing situation and this article will be updated as more information becomes available.

*Correction: An earlier version of this article erroneously located the fire at MendoRecycling, when in fact it is at C&S.