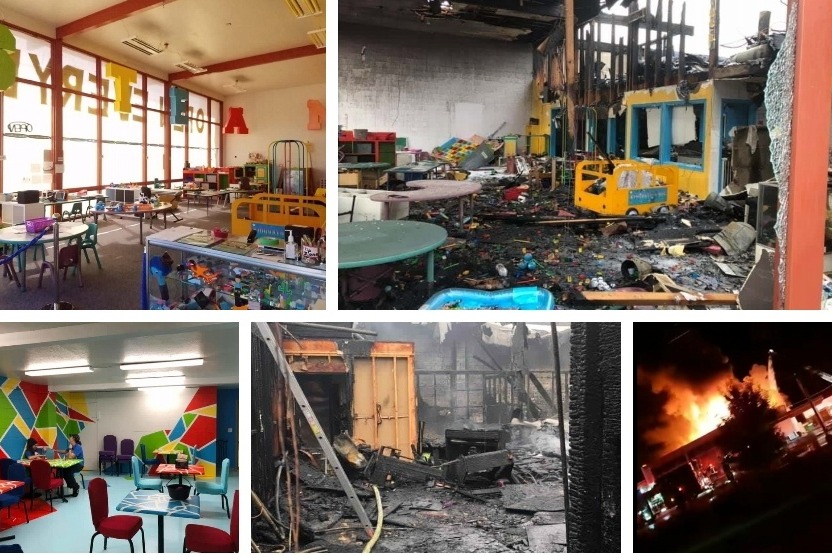 MENDOCINO Co., 10/19/19 — A crowdfunding campaign has been launched to help the owners of a Ukiah children’s entertainment center, after the business burned down late Friday evening. The Kidovation Zone, located on South State Street, caught fire around 10 p.m. on October 18, and despite a rapid response from a number of local fire departments, the building suffered substantial damage.

The fire at the beloved children’s play center began after the business was closed for the day, and no one was reported to be in the building; fire officials have not yet released information concerning the cause of the fire. In a Facebook post, the owners noted that are “were still in shock.” There is a GoFundMe to help with recovery efforts that has been set up at this link. There will also be a place to bring cash donations at Slam Dunk Pizza starting Sunday.

Kidovation Zone, owned by Amanda Trouette and Orion Walker, has been open less than two years, and many local families have noted that the loss of the business follows the closure of the Yokayo Bowling Center and the skating rink, all popular family activities in Ukiah.

The Ukiah Valley Fire Authority shared photos of the fire on Facebook the following morning. On Saturday evening, there appeared to be a brief flare up at the same location, which firefighters quickly got under control.