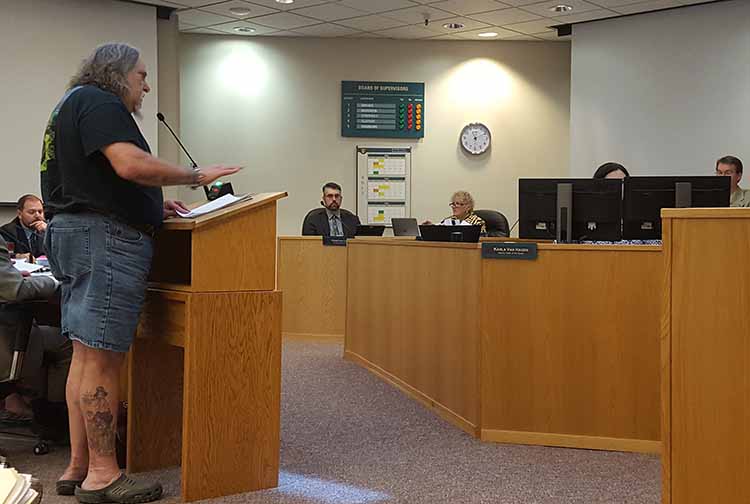 Michael Thomas of High Tides dispensary in Gualala makes a comment to the board.

UKIAH, 5/25/2017 — At a special meeting on Tuesday, May 23, the Mendocino County Board of Supervisors sent the latest iteration of another cannabis ordinance on to the Planning Commission, which could take up the matter as early as August. At issue were licenses and zoning regulations for cannabis businesses like dispensaries and manufacturing ventures. The recommendations from county staff were designed to mirror zoning regulations that already exist for analogous uses. Cottage manufacturing, non-volatile uses of volatile solvents for extraction, and the General Plan in general were topics that received a great deal of attention and assurances of future review. The board also addressed weed farmer’s markets and free samples.

“My experience with the General Plan is it’s kind of like the Bible,” remarked Second District Supervisor John McCowen. “You can find whatever you want in there.” With that, the board asked that the Planning Commission identify policies in the county’s General Plan that would support allowing non-volatile manufacturing and the use of ethanol in a closed-loop system in commercial zones C1 and C2. “Non-volatile” in this case refers to the methods used to extract various compounds from the marijuana plant. Often potentially explosive solvents, such as butane or pure ethanol, are used, though new machinery has made these processes far safer.

Expanding the uses already allowed in commercial districts would likely trigger the requirement for lengthy reviews under the California Environmental Quality Act (CEQA).

Chief Planner Mary Lynn Hunt told the supervisors that there is another planner, “looking at some updates” to the General Plan, and that she agreed with board members that, “Expansion of commercial uses might be a very smart thing to do…we need to get a little closer to reality here.”

Several members of the public spoke in support of loosening restrictions on safe extraction methods. The creation of a cottage manufacturing license was also a popular item. One dispensary owner also asked for a provision that would allow giving away free samples of cannabis-based topical salves, so patients could decide which products were most well-suited to them. The board agreed to allow this, though free samples of other products, like edibles, will remain prohibited. 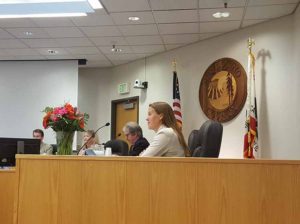 Third District Supervisor Georgeanne Croskey at her first meeting in her new role.

The board also heeded the request of Casey O’Neill, of the California Growers Association, and Jude Thilman, representing the Mendocino Cannabis Industry Association, to support cottage manufacturing. This support was rather vaguely offered, with McCowen telling county staff that he “wishes you well in crafting something.” Third District Supervisor Georgeanne Croskey, who was at her first meeting as a supervisor, agreed that she wanted to “enhance the cottage industry.”

The director of environmental health, Dave Jensen, who was at his last board of supervisors meeting before retiring, told the board that, though he wanted to see cottage manufacturing succeed in Mendocino County, “A lot of manufacturing techniques are ill-suited to the home…The first hurdle we have to overcome is, what are we talking about? What does cottage manufacturing mean?…We should have started this back in February if we wanted to hit August.” He added that he was “nervous for the success of this effort.”

Swami Chaitanya, too, expressed concern for the future of cottage manufacturing, telling the board that “Every other shrinking down of the current industry is going to put people out of business…many of these new products on the market were developed up here by little old ladies in their kitchens in the mountains.” He argued that cannabis manufacturing is in keeping with the current General Plan because it is a cultural practice that makes use of locally sourced, alternative agricultural methods and serves a niche market.

The board also addressed the non-transferability of cannabis business licenses by including a provision that such licenses under a new owner would not require review by planning and building services. Treasurer-tax collector Shari Schapmire told the board that all business licenses are technically non-transferrable, but as long as the new owner maintains the same use in the same location, they do not require lengthy, expensive review by planning and building.

After some back and forth, the supervisors chose not to impose a moratorium on dispensaries, reasoning that they do not expect a wave of applicants to flood the business landscape in the near future.

Although O’Neill’s letter and some members of the public asked the board to consider cannabis farmers markets, the board was unenthusiastic.. “Let’s don’t call it a farmer’s market,” First District Supervisor Carre Brown pleaded. Supervisors agreed to come up with a different term for the events and address the matter further in a comment letter to the governor’s office.

The board is putting together a comment letter to send to the governor’s office regarding a trailer bill that  is an attempt to reconcile the differences between state laws regulating medical and recreational cannabis. If the governor signs the bill on July 1, there will be a 45-day comment period, during which the supervisors plan to send their letter to the state.

One thought on “Cannabis business licenses head to Planning Commission”