MENDOCINO Co. 2/17/2017 — There is a slide on Hwy 175 at Hopland and one-way traffic control on Rt 1 near Elk due to a failing culvert. Here’s CalTrans’ description of the situation, and a photo from the CalTrans Facebook page:

Yesterday afternoon [Wednesday] members of our Manchester Maintenance crew were patrolling their area and a crack at the grassy edge of the roadway barely caught their eye. They pulled over to investigate, and what they saw caused them to close one lane of Route 1 and begin one-way traffic control.

The crack at the edge of the roadway was literally just the tip of the iceberg, and just like an iceberg the crack was actually the top of a cavern extending under one lane of the highway, hollowed out from water leaking out from a failing culvert. The asphalt was still intact, but it was barely being supported by the remaining soil. The next heavy semi-truck would likely have broken through the asphalt and become stuck in a sinkhole. 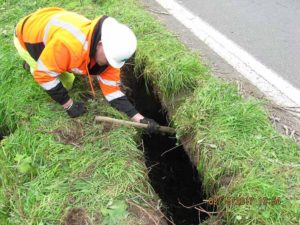 A CalTrans worker investigates the damage caused by a failed culvert.

There is a slide in the eastbound lane of Hwy 175 at Hopland.

The CHP incident page reports a skunk in the roadway at South State Street and Beacon Lane in Ukiah.

A deep cyclone approaching San Francisco may bring showers tonight and high winds out at sea. Here’s John Ross Ferrara’s description of what a deep cyclone is, from the Lost Coast Outpost:

But what is a deep cyclone? A tropical storm, a hurricane, a very profound cyclone?

After putting in a call to local National Weather Service Meteorologist William Iwasko, LoCO has learned that it is none of these things.

“A deep cyclone is just a center of low pressure more or less, it’s just very strong low pressure,” Iwasko said. “We’ll likely get showers. The strongest winds will be out over the ocean, and on land we’ll have not very strong winds up to 20 mph.”

There you have it. It’s just a big scary word that means we’re gonna get some rain.

Here’s the NWS graph of the upcoming event:

And the forecast for today: