Update: In the far northern end of the county, on the 101 near Standish-Hickey state park, there are some lines down on the west shoulder of the road. As of 1:35pm, the lines had been removed from the road and tied to a tree. The CHP incident report adds that “a vehicle also hit a CalTrans merge sign.” This incident is a traffic hazard.

There’s another mud slide in the county, also on the 101. One of two lanes from Comminsky Station Road to Pieta Creek Bridge is closed while crews remove debris from the slide. Work is expected to be finished by 4:01pm today, in time for the afternoon commute.

Three stranded motorists in the Mendocino National Forest northwest of Hull Mountain were rescued yesterday, in spite of a temporary mechanical problem with a snow cat. Here’s the full text from the Mendocino County sheriff’s Facebook page, as of last night:

UPDATE – All stranded motorists are off the mountain and on their way back to Ukiah.

Roads look clear, with one-way traffic control still underway at James Creek on Highway 20, between Willits and Fort Bragg. One of two lanes on the 101 at Cal Fire in Leggett is still closed, and traffic is only moving in one lane in each direction on the 101 from Hwy 271 to 1.5 miles south of the Humboldt county line. 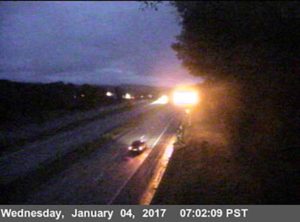 Sunrise competing with the electric road sign on the 101 north of Hwy 20 near Redwood Valley. 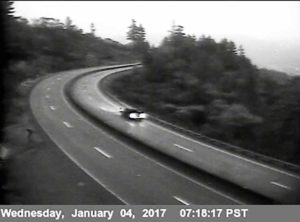 All clear in black and white on the 101 north of Ridgewood Summit, 5 miles south of Willits. Photos courtesy of CalTrans traffic cams.